Shahrizat can be the greatest Umno heroine ever


It's that season again - political parties gearing up for the general election.

PKR big wigs are at the moment gathering in JB. I was told that they find it hard to get a place to hold their convention in Johor but insisted to have it there after considering that Johor is the main Pakatan's target for the coming general election - which is most likely to be held  before the end of the first quarter next year.

Anyway, guess there will be lots of stories about Anwar and his fans over the course of the convention in the newspapers and cyberspace. So, I don't feel that I need to write about them. Btw, Pakatan's dream to capture Johor is not going to be a reality anyway. The most they can hope for is to get as much electoral seats as possible - and that will mostly go to DAP, a bit to PKR....and nothing for Pas. Really, Pas will play the crucial role of breaking the Johor Malay votes but they are not likely to win any seat in the State this time around. I had explained it here -

Umno general assembly is also coming within the next few days. There were some curtain raiser stories and commenteries in the newspapers. Mostly about how Umno people will be focusing on preparing for the general election during the assembly. Of course la, what else they want to talk about.

There is this piece in NST today about Wanita Umno written by M. HUSAIRY OTHMAN AND AZURA ABAS.

Ok la, can read one, but this small headline is a bit off la - "Movement’s Skuad Sayang effective in bringing in votes". I have seen this squad in action and I was not very impressed. The name is also a bit stupid. Well, at least in my opinion la. Honestly, I prefer the old Wanita Umno's way of doing thing under Rafidah - was more makchik-makchik but also more robust and effective.

The article started with this -  "WANITA Umno is, indeed, a picture of calm.   Two years after a heated contest for its top leadership post, which saw incumbent Tan Sri Rafidah Aziz losing out to her deputy, Datuk Seri Shahrizat Abdul  Jalil, Wanita Umno  seems to have left the past behind and moved on."
Really? Could have fooled me there. Hmmmmm.....

Then it quoted the movement's Putrajaya chief Saadiah Bakar as admitting that the movement is adopting a low- key profile but "raring to go and face the general election.” Than it go on and on about how Wanita Umno should carry itself with the election round the corner. 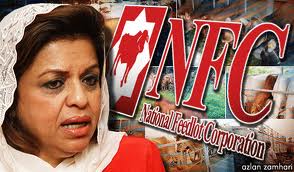 “This issue has been blown out of context. It does not involve Shahrizat directly, but her husband. She is  being dragged into it by the opposition,:" said  Federal Territory Wanita Umno information chief Hairunnisha Bivee Asm Ismail.

“Any discontent about anything or anyone must be put aside for the time being as there is a proper time and place to raise it."

Actually, if Shahrizat and the gang can think out of the box - they will see the NFC issue as a great opportunity for Wanita Umno to help BN win in style in the coming general election.

Just imagine this - there is a great debate at the Wanita assembly over the issue, then, Shahrizat, during her winding-up speech started crying on the podium and tell everyone that she feel guilty about the whole thing and tendered her resignation from all party and government posts. Of course the Wanita delegates will cry along with her and pleaded for her to stay but she instead remain adamant.

"I am not guilty, but for the sake of Umno, I insist on resigning from my posts as we can't afford even the perception of guilt among the people as we prepare for the general election. THIS IS MY SACRIFICE!!!!" shouted Shahrizat from the podium.