Watched it at a packed mamak restaurant (they even run out of chairs).

The atmosphere was electrifying to say the least as the crowd jumped with joy when the lads secured the win via penalty kicks. Congrats to the boys!!! 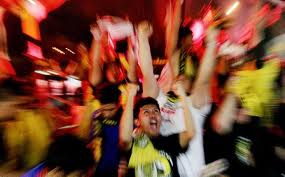 A group of scruffy youths made it seems as if we were all actually at the stadium, thumping on the table and cheering all the way till the end. The whole gang of them then goes around on their motorcycle waving the Malaysian flag and honking away to celebrate.

These boys, from their look, I presume are from poor families living at the nearby squatter settlement  of Skudai Kiri. They may not have much in the material sense, but despite that they seems to genuinely love their country by supporting its football team who are playing thousands of kilometers away. Their shouts of encouragement for the players were as if they could be heard across the distance.

Honestly, I am more proud of these boys, who could be just mat rempits at night and factory workers by day  rather than some smart ass rich kids who feel that their talents, acquired due to their privileged position in life are too good for this country. What is the point of having the brain and talents but not the heart for the country.