Prince Andrew was NOT kidnapped in Johor

Yes, Guan Eng, the prince was not kidnapped in Johor. Here is the report - 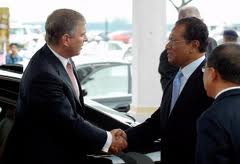 NUSAJAYA: Prince Andrew, the Duke of York, today opened the campus of Newcastle University Medicine Malaysia (NUMed) at Educity here.
In his speech, the prince said the opening of the campus would popularise the university and draw students from the world over to the institution.

About 80 students have begun a five-year course beginning September. The university is targeting a student intake of 900 by 2017.

Abdul Ghani said it is envisaged that the university will become a major contributor to the national effort to raise the number of trained doctors from 3,000 annually to 4,000 in five years' time.

He also said that the opening of the campus provided 50 jobs for the local people. -- BERNAMA

Well, just for the record, Guan Eng said these in Singapore -

This is another Crook