Dr Chua must lead from the frontline up north 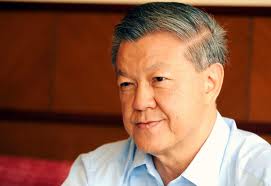 Dr Chua Soi Lek is definitely a brave man. Call him what you may, but a coward he is not by any long shot.

The way he handled his sex video scandal was the most cool act which I think no other Malaysian politician could ever emulate.

The fact that he actually could bounced back from a sure political death was simply amazing.

Many are still harping on his "tainted" record but the MCA president seems to be oblivious of all that.

Refusing to be distracted, he seems to be focused on his job and going all out to revive the much battered BN component party.

It's not an easy job as MCA is arguably at its weakest moment now. Dr Chua have to personally go on the ground to marshal his people who are still shell shocked by the mauling of the 2008 GE.

Now comes another challenge - where he will place himself for the coming GE, which is just around the corner.

The way I see it, Dr Chua need to do something extraordinary - he must lead the charge from the frontline.

He had proven himself to be a brave man in the past and I am sure he would not dissapoint his people in MCA and friends in BN for this one.

My bet is, he will not choose to contest in a safe area while his troop are facing the heavy artillery of DAP.

The recent invitations to contest from his home state Johor as well as Negeri Sembilan and Perak is a chance for him to prove his leadership qualities.

My opinion is, Dr Chua must choose Perak, where he is needed most compared to the other States,  to rally the MCA troops there.

Afterall, he has his son holding the MCA fort in Johor while Negeri Sembilan MCA had reportedly improved a lot of late.

I will be cheering Dr Chua if he choose to go deep into enemy territory to recapture MCA's lost ground up north and win back the Chinese votes for BN.