No joke...it's always about race 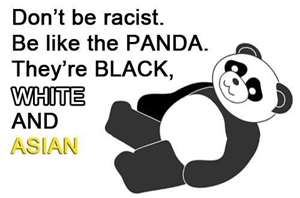 See, I am not bullshitting you when I wrote this -

It is all actually about DAP winning over all (if possible) Chinese votes. They just want to create an impression that the party is the true Chinese party which stood up to the evil Nazi-like Malay civil service and protect the Chinese community.

That is the modus operani of DAP all along which include the villification of institutions such as the polce, MACC and the others.

Now that they had been exposed, their Malay allies (or stooge, whichever way you want to see them) of Pas and PKR are scrambling to clean up the mess as reported by the pro-Pakatan Malaysian Insider -

By Yow Hong Chieh
KUALA LUMPUR, Nov 9 — Pakatan Rakyat (PR) says it will not trim the bloated civil service if it takes over Putrajaya, but will instead focus on making government staff more efficient.

In what appeared to be a move to quell public sector anger over DAP publicity chief Tony Pua’s proposal to reduce civil service headcount, the opposition pact today pledged to retain existing staff should it come to govern Malaysia.
“Pakatan Rakyat would like to clarify that the position of the 1.2 million civil servants and officers will be guaranteed, as enshrined in [Articles 132 and 135] of the Constitution,” Salahuddin Ayub told reporters in the Parliament lobby.
The PAS vice president was flanked by PKR vice president Nurul Izzah Anwar and PAS central committee member Dr Dzulkefly Ahmad.
Posted by BIGCAT at 15:45