The most stupid thing any self-respecting gangster would ever do before he go and whack someone is to call that someone and warned him that he is coming to whack him.

Of course the warned intended victim will either get himself ready to fight back or would have run off, isn't it?

The truth is, people only issued threats either because they want to bluff others into fearing them, or that it is the only thing they can afford to do when cornered by their enemy.

Well, this bit of wisdom is not actually the product of my original thinking or something I read in Sun Tze books. This is what I got from repetitive watching of the Godfather movies. Only low-class street punks would try to scare others with threats so that they may look tough. A real mafiosi would quietly go about killing their enemies without much fuss.


Of late, I noticed that there is a trend among the Pakatan leaders and their allies - that is to threaten people with potential legal suit. Honestly I find this new habit of theirs very irritating and so childish. 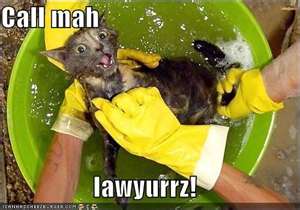 Talking about spoilt brat, remember when Guan Eng threatened to sue Bernama, TV3 and what nots over his Johor slur....well, I am still waiting la Guan Eng. Actually, you were caught over that issue isn't it Guan Eng? For lack of words to say to show you are defiant, you go about threatening legal suit isn't it? Hopefully people will say - "Wah! Guan Eng so macho, so handsome...he is fighting back liao...just threatened to sue the evil Umno people...he is so blave one...he is my herrro...."  Aiya, I know your trick lar.

See, I saw the same trick being put up by Ambiga yesterday. "I dare you! Otherwise you will be hearing from my lawyers!" she exclaimed over the Sexuality Merdeka issue. What la Ambiga, you are a lady and when a lady threaten people like that, it makes her look like an ugly witch. Ladies, when you try to show you are garang or macho, it actually makes you look a bit more fat and ugly. Really....so, be cool and composed and dignified while in front of TV camera.

Show a bit of class la Ambiga. If TV3 really twisted your words, then just sue them la. Maybe you can win and the money can be donated to the gays and lesbians fund.

The truth is, Ambiga over estimated herself. The Bersih 2.0 thing really got in her head, causing it to swell and become so big. She thought she can get away with anything. She got the backing of the mighty Pakatan what. So, she pulled this free sex stunt la. Unfortunately it blew in her face and causing untold damage, especially to Pas, which was forced by it to show their true Taliban's card.

So, what else can she do in front of the TV cameras yesterday? Well, she needed to continue to be defiant, otherwise she'll lose whatever credibility that she had left. That was why she put up that garang act of a lawyer who appeared to know everything. Same like Guan Eng, she was hoping for the same effect, at least among the Pakatan supporters "UH UH UH...die la those evil TV3 people...Ambiga had threaten to sue them...wah, this Ambiga is a real heroine ... don't fool around with her lar ... she is a lawyer you know ...."

PS . Eh Ambiga, please do me a bit of a favour...please tell your friend Irene Fernandes of Tenaganita to at least comb her hair next time she got on TV...she really looked like an expired Chow Kit lady of the night la yesterday...please arr...