The following is the first three paragraphs of a story which appeared two days ago in the normally pro-Pakatan Free Malaysia Today -
KUALA LUMPUR: Penang Chief Minister and DAP secretary-general Lim Guan Eng last night used the Malaysian Consultative Council of Buddhism, Christianity, Hinduism, Sikhism and Taoism (MCCBCHST) Penang inter-religious goodwill dinner to criticise Umno, the backbone of the ruling Barisan Nasional.
The event, which was supposed to foster closer relations between the different religions in the country, was turned into a political forum by Lim taking potshots at Umno and the ruling BN.
He also took the opportunity to campaign for the opposition pact, Pakatan Rakyat, saying that the coalition of three opposition parties – PKR, DAP and PAS – has managed to bring about good change since the 2008 general election. 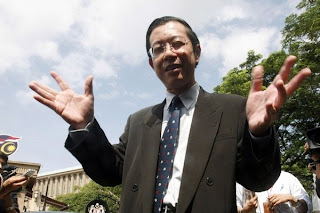 I repeat, the above three paragraphs were not written by me, but by FMT.
For the full article - CM uses goodwill dinner to bash Umno
Ok, for Guan Eng to exploit religious sentiments like that is nothing new. I had previously written about it. And for DAP to turn around and accuse its opponents, especially Umno of doing exactly the same thing they have been doing is also normal. Of course the DAP cybertroopers will come here and raise such hue and cry when it was highlighted by this blog. That one also normal and I expected it.
What however bothers me a lot about the whole thing is, when I called a friend who is a journalist and asked him, why he and his colleagues didn't try to get comments from MCCBCHST on their dinner being turned into Guan Eng's political pulpit, this was his reply -
"We did, but there was this archbishop who is the one in charge of organizing the whole thing who said that they actually sanctioned what Guan Eng said at the dinner."
Upon, reflecting on what my friend  told me, it dawned on me that if MCCBCHST has been truly apolitical, they would't have let such things happened. They should had told Guan Eng such political talks, fused with religion is not what MCCBCHST stands for.
Well, I guess religious men with political ambitions and aspirations in this country were not confined to just Muslims from Pas, after all.
Posted by BIGCAT at 14:49