Throwing tantrum at the Press

A Penang-based journalist friend just told me that she had attended a Press conference by DAP sec-gen Lim Guan Eng and his father Kit Siang yesterday.

It was supposed to be a post-mortem Press conference for the just concluded DAP's 16th congress. The whole thing however turned into a BN and media bashing session.

"Guan Eng was like going on and on for almost an hour about (PM) Najib has no right to criticise DAP for not having a properly elected Malay in the CEC and how the media were out to get him and his party over the whole thing,"she said. 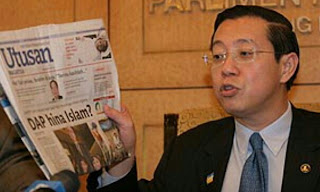 My friend who is a Chinese sounded really exasperated when she related to me what happened at the Press conference.

"We hardly managed to ask any question as Guan Eng was so intent on pouring his unhappiness over the issue. He didn't even answer our questions on how the CEC election results had turned out like that."

She said Guan Eng shouldn't had blamed the media for its coverage of the issue as that was the most newsworthy item at that party congress last weekend.

"He can't be telling us to just write how wonderfully democratic and multi-racial DAP is while that was hardly the case."

Well, nothing new there. Guan Eng has always been like that. Anwar Ibrahim is no better. Remember how he controled the MSM in an iron grip when he was the DPM? Ask the more senior reporters la if you are too young to know. The guy haven't change, ok? Still as arrogant as ever. Give him the power and you all will know la.

If all those journalists think Pakatan as government means better Press freedom, then they are really naive. To all those Malaysiakini reporters wearing the yellow ribbon badge, you all are so clueless la. You all are as partisan as the MSM journalists.  Just from different side. Don't be so perasan lah that you all are independant and not beholden to any side. Swallow that.
Posted by BIGCAT at 10:27