It is the end of the year and I'm going away. Been busy preparing for my departure.

Since I got some time now before going to sleep, I think I better do a wrap-up for the year 2012.

First, for perspective purposes, this is the wrap-up of this blog for 2011 - Another year ends - a recap

To make it easy for the wrap-up, I think it is better for me to identify the most significant posting of each month instead of me doing my usual rambling which may bore everyone.

July
Are we sure things are so awful?

Well, those were my choices of this blog's significant postings this year. They are significant because I wrote them either due to a very important issue at that time or it marked a significant event in my life.

Oh, for the most significant picture of 2012, my choice is this one - 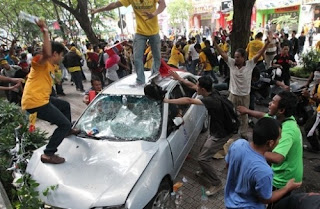 As for the future, I intend to give more thoughts to each posting instead of impromptu writings which is my current practice. I will also stop being so personal in this blog - so, no more boyfriend stories or any such nonsense like that.

A senior blogger had told me that my blog is so full of fluff, causing it not to be taken seriously by the blogging community. I guess he is right. I am nothing as a blogger compared to those big time sopo bloggers like Rocky, Apanama, Big Dog, A Voice, etc.

So, from now on Big Cat is going to try to be a serious sopo blogger too. Not so much to win over appreciations, but rather more to stay relevant among at least my fellow bloggers. Of course, that is if I can find the time to write at my new place....and if I find being a serious sopo blogger is not too boring.

Otherwise, I may just turn this blog into something else. Maybe an entertainment or food blog. See lah how.

Ok, a bit of light music will be nice to wrap up the year, isn't it?


Cheers everyone. HAPPY NEW YEAR.
Posted by BIGCAT at 03:21