Really, we pay our income tax and contribute much to the country's economy, yet when it comes to getting reliefs from the government, I believe we are the ones who are getting the least.

Thus, many from my income group are not really that supportive of the government. They are also the ones who are most susceptible to believe in all those things being peddled by the Pakatan people. All those assistance given by the government which enabled them to raise from their lower income background to where they are now were forgotten.

It is not that they are really suffering from any real economic deprivation, but when they have to put up with things such as paying up to 20 per cent of their hard earn salary to the IRD, they don't really like it. And when the government gave out all those money to others, they don't like it even more.

When the Pakatan people come to them with all those stories of BN's evilness and dastardly acts, they so eagerly want to believe them. This government who treated them like some neglected middle child must be evil, they thought.

Well, still have the Honda Civic, apartment in Subang, and relatively ok lifestyle with occasional dining at some expensive Japanese restaurant in Sri Hartamas.

But still, so geram la. Just want to support Pakatan to spite those BN/Umno people. They only take care of their kind of people only, never care about people like us. Ya, and that Rosmah Mansor is supposed to be some sort of an evil woman what....hmmmm...must be true la..... 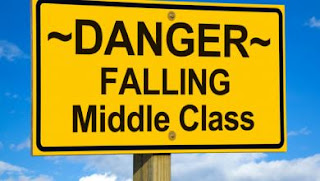 Hmmm....let's see what the Pakatan people have specifically in store for the much suffering lower middle income people.....errr.....errrr....nothing also la. They are also making all the populist moves, such as trying to capture the votes of the Felda settlers and lower income earners. Of course they talk a lot la. But, their promises look even less promising than those of the BN's.  Their promises were in fact even more populist in nature.

What? Anwar Ibrahim promising free education at university level? Eh, we pay the tax okay, why want to spend it spoon-feeding those kids. Give the money to them but make them pay it back la once they can earn their own keep. The PTPTN is okay what. Fair, you borrow, you pay la. Don't burden us who pay taxes some more, okay. Not only you all don't want to give us much, now want to spend more of the money we pay you in tax, so that you can become more popular. What la.

Guess people like me have to continue fending mostly on ourselves. Never mind. We, the toughest and brightest of Malaysians will survive. Why would I care much about all those useless politicians. We are just going to work for our own betterment. Better this way. At least we are not beholden to anyone.

Well, whatever it is, at least under BN there is not much trouble. Still can cari makan.

Pakatan? Well, you really think DAP and Pas will still be so chummy chummy after they got power? What will be the Malaysian story after they took over? Less corruption? With Anwar and the gang in charge we can have a clean government? Are you sure? Anwar, the Malay studies graduate knows how to handle the economy? He almost sunk the country as finance minister and DPM in the late 1990s, ok? Also got hanky panky, ok?

Us, the lower middle income people will be better off with Pakatan? I doubt.
Posted by BIGCAT at 18:20