There was this report by the pro-opposition Malaysian Insider on the Selangor DAP convention last month where it was said that the party was no longer fully confident Pakatan will retain the state in GE13.

Quoted were its chief Theresa Kok and sidekick Tony Pua who both insisted that BN has been playing dirty by exploiting rural Malays' sentiments on religion, race and royalty. 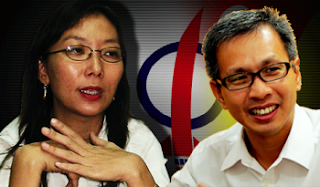 Hmmm....actually, that's very much like what DAP did in the run-up to the last Sarawak state election two years ago. Of course, Sarawak got no royalty, but race and especially religion were indeed exploited to the maximum by DAP at that time. The end results were urban Chinese-dominated constituencies were now held by DAP while the surrounding bumiputra areas still under BN.


Bear in mind ya, that video was recorded and uploaded to Youtube by members of the so-called Citizen Journalists who are trained and financed by the ultra-pro Pakatan Malaysiakini.

So, now that BN has apparently regained some of its lost support, DAP are turning around to accuse them of using religious sentiments, among others, for political expediency. What a load of crap lah.

I think the Pua-Kok duo, who are christians should be a bit more careful with their accusations.

If you all want to accuse people of using religious sentiments, look at yourselves first la.

Or, look at Pas, your partner who blatantly accused their fellow Muslims of different political affiliation as infidels and apostates.
Posted by BIGCAT at 13:45