The selfish Chinaman at it again

The Chinese schools people really need to get rid of this Dong Zong's Yap Sin Tian. He is really making them look like some Chinese racial extremists. 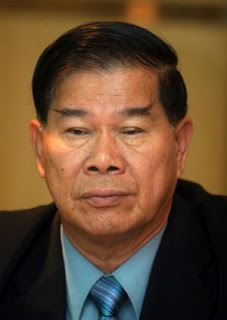 This time, Yap is planning to organize a rally at the Parliament on Sept 26 to demand the resignation of Deputy Education Minister Wee Ka Siong for allegedly failing to settle Chinese education issue.

Not enough with this rally thing, is it? Never learned from the Merdeka Eve incident, are you? What? You want some clueless youngsters and ah soh to go mooning and stepping on picture of Wee? What if some Chinese youngsters instead decide to step on the picture of the real number one at the Education Ministry, TS Muhyiddin Yassin? A young Chinese punk stepping on the picture of a Malay deputy prime minister out of unhappiness over Chinese education issue. Surely explosive isn't it? You all want such thing to happen?

Yap, with the backing of DAP, had organized a rally at a Chinese college in Kajang earlier this year. You can read my take on that occasion here -

and here
Malaiyoo teachers and their Chinese students (UPDATED)


Now, that event was supposed to be a close door affair and see lah what happened. This time Yap wants a rally in front of the Parliament, where his and his followers' antics will be for all to see. I think he wants for people to react (in an ugly manner, I supposed) so that he can turn around after that and claims himself to be a Chinese hero. I believe this Yap, is the type who don't give a crap about what would happened to race relation in this country, that is, as long as he can get what he wants.

DAP which last time smells an opportunity to score points among the Chinese by backing Yap during the earlier rally in Kajang, may not openly support him this time around. Must jaga image ma.

But I am quite confident its members will be there to bolster the crowd. DAP can always take advantage from the fall out of what's going to happened at the planned rally. Nothing better than pictures of some Malay FRU apprehending some young Chinese heroes who try to save the Chinese education system from the evil marauding Umno (read Malay) government. True or not?

Anyway, here's a good analysis on the real reason why Yap wants to be a Chinese hero by Joceline Tan in The Star today -
Yap, Wee on a collision course
Posted by BIGCAT at 12:10