Johor government was not at fault in Mersing

A senior Johor government official took the trouble to get in touch with me today to explain the circumstances surrounding the cancellation of the ambitious Mersing Laguna project.

He said he had noted that in my previous postings on the issue that I was quite upset over the whole thing.

The official, whom I have always trusted gave me a detailed explanation of what had happened, all the way when the project was conceptualized more than five years ago till its recent cancellation which was announced by the Sultan of Johor.

I was very satisfied with his explanation, but have decided not to present what I was told here due to the sensitivities of the subject matter disclosed to me.

Suffice to say that, I am putting it on record here that I have changed my mind and now agree that the cancellation of the project was the right thing to do.

It must however be stressed here that the Johor government is not to be faulted whatsoever over the whole thing.

From what I was told, I believe that State government officials, especially those from UPEN who were involved in evaluating the viability of the project had done a remarkable job and were instrumental in avoiding losses to the state due to the cancellation of the project.

It should also be noted that the State government official had insisted to me that the cancellation of the project does not mean that the Mersing district, which is arguably the least developed in the State will be neglected.

He said there will be other development projects, which are more viable will be introduced in the district soon to ensure the well being of the Mersing people. 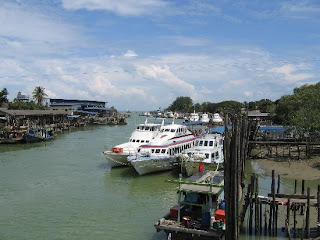