Guan Eng and gang should join this one

There are going to be a few demonstrations against the stupid made-in-USA "movie" which insults the Muslims and their religion.

Umno Youth apparently want to have a gathering at a mosque to voice their protest.

This however is too tame for Pas, the self-proclaimed heroes of Islam.

They instead plan to have a massive rally in front of the US embassy. They are to march from the KLCC to that building which represents the Great Satan country.
Great opportunity to show their bravery and pretend they are somewhere in Gaza throwing rocks at the American-backed Israeli. If only we can really send these fellas there.... 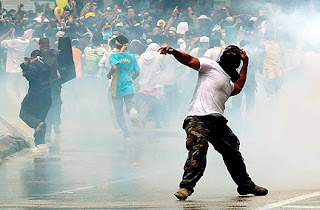 I wonder if Pas allies, the DAP and PKR are going to march along. After all this is a great opportunity for Pakatan to win back some lost ground among the Malay Muslims voters who in recent months are beginning to show signs of warming up to BN more than ever.

Lim Guan Eng should be marching in the front row. He is after all according to Pas spiritual leader Datuk Nik Abdul Aziz Nik Mat similar to the great Khalifah Umar Abdul Aziz. Sure he wants to show that he can support an Islamic cause. The evangelical Hannah Yeoh can wear her tudung and march too. Ronnie Liew also can dust up his songkok and come along.

Tian Chua, you want to join this one or not? You sosialis what? Sure want to hantam the Americans, here's your chance la. Of course unless you are just a fake one all along. Ambiga and Bar Council buddies, you all want to return the favor to Pas and join them for this one? Eh, they come down by the thousands for your Bersih nonsense what? At least sent la observers to ensure the safety of Pas' Unit Amal people. What? Cannot? Hillary Clinton will take back Ambiga's award if she join? Ok lah, whatever....

Errr....anti-Lynas people want to join also ka? Bersih you join what that day....

Marina Mahathir.... I don't want to ask. She sure don't want to join this one. Demonstration against the US is so not cool. Very terrorist like. Not fashionable at all. Oh, and these Pas fellas are all homophobic. You don't know that ka? So not politically correct to join them, eh.

Anyway, those who can be there all can kecoh-kecoh in front of the US embassy until the FRU have to spray them with chemical laced water, scuffle a bit, tangkap a few ....and that's it, all can become pejuang-pejuang Islam fighting against the evil Zionist-American backed corrupt BN government....something like that.

Sure can win lots of votes like that. The Malay Muslims are real suckers for such things, aren't they ? It's just the way they are. Must got something to do with their humble culture, isn't it?

Anyway, my bet is that DAP, PKR and these other funny people will not be too interested to join in this one despite the great opportunity to capture lots of votes. All these potentially dangerous stuff, they will leave it to their donkeys in Pas. Not worth the risks leh.

During all those violent incidents during the Bersih riots, the majority seen bashing up the policemen were not DAP people what. They are Malays, aren't they? And there are not that many Malays in DAP, aren't they? See, I call these people donkeys, many will get angry. But it's true what? How else may I describe them?

Ok lah, let's just see how it's going to be. Just hope not too many people get hurt this time.
Posted by BIGCAT at 23:16