The Malaysian Anti-Corruption Commision (MACC) have been accused of many things including the murder of Teoh Beng Hock.

They were said of being the instrument of the evil Umno/BN, specialising in harassing Pakatan people in various Pakatan controlled State governments.

Many more lah of such charges against them. Not very much difference from those levelled at other institutions such as the police, judiciary, election commission and the civil service who include even the makchik-makchik manning the service counters of government agencies.

All are said to be Nazi-like lackeys of the corrupt Malays of Umno. Well, at least thats what I understand from various remarks of Pakatan leaders such as Johor DAP's Dr Boo Cheng Hau (try google Dr Boo and Umno civil service and you may find out what am I talking about).

Ok, back to MACC. When Teoh Beng Hock was found dead, all Pakatan fingers point to the MACC boys. The most celebrated theory was that Teoh was killed while under interrogation. He was dangled out of the window, they said, to scare him into betraying his DAP bosses but it all went awary when the MACC goons slips, causing Teoh to fall to his death.

Lets skip the royal commission inquiry. The whole point here is that MACC as an instrument of evil Malays of Umno had killed Teoh, an idealistic young Chinese man who was about to get married and soon to be a father. That was what were drummed into the public psyche, particularly the Chinese community in the preceeding months. The royal commission's findings doesn't really matter.

The same thing happened to the other government agencies. Police, judiciary, and even schools - everything which went wrong are because they are instruments of the evil Umno/BN.

Ok, of course, there were always a bit of praises too for the rank and file - for example, the policemen controlling traffic at congested  roads caused by Pas ceramah. After all, these Umno/BN lackeys are also voters. But if things went a bit wrong, you can bet, these policemen will immediately become anjing kerajaan or barua Umno again to these Pakatan people.

Prosecutors of MACC yesterday secured a conviction against former Selangor MB Dr Khir Toyo, an Umno guy. What about that? Some lackey lah these MACC guys. The judge also the same. Send such a handsome Umno guy to jail for what? You all forgot ka who they said are your masters? 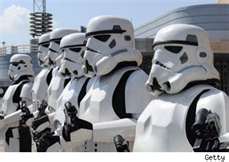 You all MACC people not scared ka your Umno dark overlords sacked you all? I thought you all only raid Pakatan leaders' office only and throw people who went against Umno out of the window?

Well, now MACC become very brave and not scared of their Umno lords and masters, why don't they go and try raid a DAP leader's office la, and see what happened.

Try small first - raid Ronnie Liu's office. They alleged that he is quite chummy with some gangsters because he protect their massage parlours in Selangor. I bet, if you all really do so, sure some more people will fly out of the window one.

After that, you all can try raid Guan Eng's office and check if it is true that all car park developers have a hand in deciding the Penang government's policies. Try la. What you all MACC people got to lose? You all already branded as instruments of the evil Umno/BN what.
Posted by BIGCAT at 12:59