Ending the age of innocence

Not working. Taking a break. 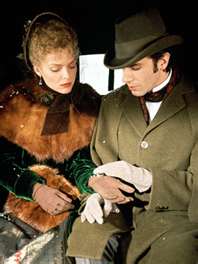 Actually I watched the movie many times before. I have a DVD of the movie which  I bought when I was in London one fine spring morning many years ago. Don't know where I misplaced it.

For details of the movie, in case you have not seen it- just google, ok.

Well, basically, it's about as what the title suggest - Age of Innocence. Something like those period in life when one knows that oneself doesn't know much but still pretending knowing so much anyway.

It is something like what the Malays are facing now as they are preparing to determine their future via the coming general election. So many are clueless of what will befall them if they made the wrong choice yet still they pretend they know what they are doing.

I am not claiming that I know what is best for everyone, but I do believe we need to be flexible with our thinking. There is no absolute in thoughts.

When the facts stare us in our face, we must be brave enough to accept it.

Well, I have always been anti-establishment. Spend most of my free time in college reading all those leftist books.

Can't remember ever supporting Umno or BN in anything back then. Actually, I am always put off by the over the top Umno people.

Well, being anti-estalishment has always been more fashionable anyway.

Post 2008 however made me realised that the Pakatan people are even worst than BN. Their hypocricy was too much for me to swallow.

Many idealistic people who joined Pakatan to get rid of the evil BN are starting to realise this. It's even worse on the other side.

What's keeping them away from BN or Umno is that they still see reprehensible characters there. Corrupt people in position of power, immoral people talking about religion and good values, selfish people claiming to be sacrificing for Agama, Bangsa dan Negara. All these disgusting people are the real reason why Umno or BN are still struggling to gain the trust of the rakyat.

My hope is that for Najib to realise he need to clean up house for the coming general election. He must know the difference between the good and bad apples.

The way I see it, the one with a cleaner house will win. No matter how hard BN work, they will not win with all those baggages of bad characters hanging from their neck.

Najib need to be decisive and firm to immediately get rid of them.