Malaysia have apparently scored another first in the world.

It is probably the first country where elements of Islamic and Christian far right have joined forces in an effort to topple the government. 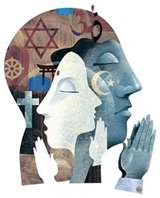 We have over the years probably been aware of the Taliban-like elements within Pas, who believe that this country is going the Satan's ways because its government does not implement their intepretations of the Islamic law.

These are the people who believed that their fellow Muslims would go to hell if they simply vote the satanic BN which government they said defy what they believe to be Allah's decree for thieves to have their hands chopped off and those who commits adultery be stoned to death.

Medieval though they may seem, these group of Muslim extremists indeed form the core of Pas till today. You may argue that the so-called liberals of Erdogans are taking over, but the reality is that Pas will be nothing without these hard core non-compromising Islamists. They recite Quranic verses to bolster their claims and mesmerise the Malay muslim electorates, promising a relatively easier passage to heaven which starts by a simple cross on the ballot paper.

These are the people who make Pas a political force that it is. After all, divine attractions are hard to resist. It's simple yet powerful. On one hand, you have the Pas people who want to set-up an Islamic State and on the other, those who claimed they just want a welfare State. Put them side by side and who do you guess the orang kampung in Kelantan will choose?

Pas was said to be the only party which really offers an alternative sistem of governance to the one runs by BN. The Islamic system is Pas' main selling point. Religion really do sells in this country, particularly among the common God-fearing people.

DAP has since realised this and employed the closest thing it could to what Pas has done - exploitation of the Christian faith. Why Christian ? It's because the other main religions are hardly political. Buddhist or Taoist monks don't look right giving fiery political speeches, don't they? It is also seen as the final key to unlock the BN's fortress of Sabah ad Sarawak which have high percentage of Christian voters.

The recent Sarawak State election saw the most blatant exploitation of the Christian faith to win votes. BN were portrayed as an evil Christian prosecuting entity, suppressing the faith and neglecting the Christian bumiputera of the State.

Fotunately the Sarawakian bumiputera didn't buy it and saw the other aspects of DAP's insidious campaigning tactics which is the exploitation of racial sentiments, particularly those of the Chinese in the urban areas.

Still, the effect of religious sentiments were seen to have make some difference and the tactics will be tried again. The setting up for similar modus operandi were already there. Thus, we would from time to time hear statements of political  nature made by men who are supposed to be religious leaders. The latest on none other than the Christmas eve of the past few days.

How far have political elements infiltrated the church in this country could probably be guessed by who within the ranks of bishops and reverands who had made those political statements. What is clear was that most of these statements were of the same pattern - oppression of the Christians by the Muslim-led Umno of BN.

Are Christians really oppressed in this country? Seriously? Well, I don't even want to go deep into that, as I fear I may unintentionally offend other people's faith by my choice of words. You all answer that yourself lah.

Now, the anti-BN/Umno alliance of all these far-right Islamists and Christians is indeed the first of its kind. As the saying goes, the enemy of my enemy is my friend. Anything but Umno, they said.

It is something like the US' neo-con Christian fanatics' support for the Zionists and their murderous regime in Israel. They support the Zionists because they want the biblical prophecy of armaggedon and return of Christ to be fullfilled. After that they believe the Jews will convert to Christianity for the end of time.

Isn't that very similar to Pas' justification for their collaboration with DAP? That Lim Guan Eng will eventually become a Muslim and a caliph of some sorts? That Pas will eventually turn everything Malaysian Islamic?

My guess is that the DAP-supporting Christian extremists have the reverse notion of that.

So, does it seems ok for religious extremists from all sides to get together to fight against a common enemy? What will become of this country once these extremists have a say in its governance?

Those are among things Malaysians should consider within the next few months before they cast their votes in the coming general election.
Posted by BIGCAT at 15:59