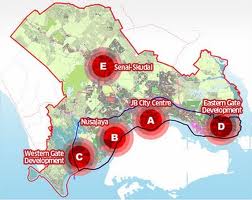 Well, Irda people may hate me, but that's besides the point.

Saw some good stuff and here there are  (I like the last one at number 19) :

8. The Federal Government also committed RM6.3 billion to fund critical enabling infrastructure in Iskandar Malaysia, including road infrastructure, drainage and river-cleaning projects, as well as development of public housing. Under the Ninth Malaysia Plan, a total of RM1.26 billion was allocated for highways and roads within the region. The road works include the Coastal Highway from Johor Bahru city centre in Flagship Zone B, New interchanges and bridges, as well as road upgrades to improve traffic flow and dispersal in and around Johor Bahru. Eleven drainage and six river cleaning projects have also been completed, and later this afternoon, we are honoured to have Yang Amat Berhormat the Prime Minister to officially launch the Iskandar Malaysia public housing at Lima Kedai, Gelang Patah, within Nusajaya.

9. During Iskandar Malaysia's first phase of development, which ran from 2006 to 2010, we had secured committed investments of about RM69.5 billion. This was approximately 148 per cent higher than the target of RM47 billion that had been set for that period. It is a commendable achivement given that the global economy underwent severe financial distress in 2008 and 2009. We are pleased to share with Yang berhormat Dato' Sri, that as at the third quarter of 2011, the committed investment total in Iskandar Malaysia have further increase to RM77.8 billion.

10. Of the total committed investments for the first phase, 59 per cent were domestic investment while foreign direct investment (FDI) make up the remaining 41 per cent, making for a healthy mix of sources of funds. About RM38 billion of the RM77.8 billion in committed investments have been actualised. This has seen a number of important developments getting off the ground, with several completed or approaching completion, across the five Flagship Zones in Iskandar Malaysia. They include catalyst projects in the education and leisure and tourism sectors, key infrastructure such as upgrading works on existing roads and new highways, and other projects in sectors such as healthcare.

12. Over the current five year period from 2011 to 2015, Iskandar Malaysia is expected to more than double the number of employment opportunities to an estimated 55,730. This is in line with the operationalisation of a number of key catalyst projects within the period concerned in the various Flagship Zones. In particular, the creative and ICT sectors are expected to be key employers, with 18,000 jobs to be generated through the coming on stream of projects such as MSC Cyberport City and Pinewood Iskandar Malaysia Studios. The electrical and electronics, leisure and tourism, and education sectors are expected to continue offering numerous employment opportunmities, also as a result of more key developments being lunched and operations ramped up in the sectors concerned.

19. Out of the total cumulative committed investments of RM77.8 billion to date, only RM6.3 billion are funds provided by the Government of Malaysia, to fund the development and enhancement of critical enabling infrastructure in Iskandar Malaysia. However, the Government's investment in the region has helped attract and generate an increasing sum of private investments over the last five years. As of today, this translate into a ratio of 1 to 11, meaning that for every RM1 that the Government invests in Iskandar Malaysia, it helps to bring in RM11 of private investment.

Well, if Irda's corporate comm people were not too busy chasing shadows in the form of an insignificant anonymous blogger, they would probably had got all these good points about Iskandar Malaysia highlighted by their boss to be published by the Press.
Posted by BIGCAT at 19:05