Let me start by wishing those who celebrates Christmas a joyous day.

Have to remember that I can't just send the greetings to Christians as many of other faiths also celebrates the occassion.

I even have a Malay Muslim friend who actually roasts a turkey every Christmas eve for his family. It's a "tradition", he and his wife acquired when they were studying in the US. Just for fun, he said. 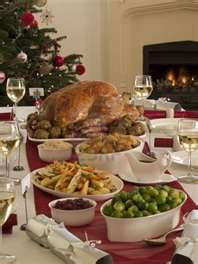 I am not very sure, but I think roasting turkey is more for Thanksgiving, isn't it? Well, whatever lah, as long as my friend and his family happy. Afterall, in Japan, they celebrates Christmas by eating KFC, of all things....really I am not kidding you....weird Japanese.

Everyone are probably merry today, but this year's Christmas seems a bit tense to some people. To me that's the problem when people starts mixing religion with politics, or rather try to gain power via religion.
You can read about the dilema of the Malaysian churches in the latest postings by these two rival bloggers-

Well, back to the festive mood....here is a bit about Christmas I took from Wikipedia -

The precise day of Jesus's birth, which historians place between 7 and 2 BC, is unknown.[13] In the early-to-mid 4th century, the Western Christian Church first placed Christmas on December 25, a date later adopted also in the East.[14][15] Theories advanced to explain that choice include that it falls exactly nine months after the Christian celebration of the conception of Jesus,[16] or that it was selected to coincide with either the date of the Roman winter solstice[17] or of some ancient pagan winter festival.[16][18]
The original date of the celebration in Eastern Christianity was January 6, in connection with Epiphany, and that is still the date of the celebration for the Armenian Apostolic Church and in Armenia, where it is a public holiday. As of 2011, there is a difference of 13 days between the modern Gregorian calendar and the older Julian calendar. Those who continue to use the Julian calendar or its equivalents thus celebrate December 25 and January 6 on what for the majority of the world is January 7 and January 19. For this reason, Ethiopia, Russia, Ukraine and Macedonia celebrate Christmas, both as a Christian feast and as a public holiday, on what in the Gregorian calendar is January 7.