While Umno are busy with its general assembly in KL now, the DAP are relentlessly working here in Johor.

Actually Johor DAP have been doing so since the end of 2008, while BN were still reeling from that disastrous general election.

It was believed that among their strategies was to move some of their supporters to strategic constituencies.This include the changing of IC addresses and voting registration of these supporters in the new constituencies where they believe DAP can win. 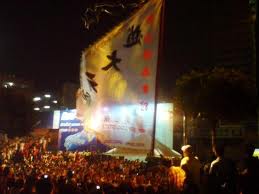 This was based on the abnormal increase of Chinese voters in certain areas.

I don't think there were any sudden population bloom among the Chinese in those areas at any period of Johor history. The only explanation is that those "additional new voters" come from other constituencies where DAP can't win.

I am honestly still in gloomy mood and had this morning decided not to post anything today, but this article I saw in mysinchew made me decide to write something.

It was written by Sin Chew columnist  Tay Tian Yan. I had read some of his previous articles and he came across as not being very BN friendly. This particular article was picked up by the pro-Pakatan Malaysian Insider.

(I am putting it here with addition of my own thoughts)

PKR and Umno have successively held their general assemblies.
(Me - Umno not finished yet)

And the timing offers an excellent opportunity for people to make a comparison between the two.
(Me - Agree)

PKR's assembly was anything but momentous. Safe for the challenge by Youth leader Shamsul Iskandar that Umno amend the Constitution to ensure only Malays could become the country's prime minister, which did manage to arouse some controversies, the assembly was otherwise largely uneventful and uninteresting.
(Me - Agree)

But that does not mean PKR is devoid of its characteristics. Just the opposite, the party made a wise strategic move by holding its general assembly in Johor Bahru.
(Me - Aiyo, lame gimmick la that one)

Wait a minute! JB? The stronghold of Umno? Was PKR looking for trouble?
(Me - Poor attempt at being cheeky by Tay)

Not exactly. The strongest point of the rival could also be its most vulnerable part.
(Me - Too drama leh)

The clash of German and Soviet tanks in Kursk during World War II is a point in question.
(Me - Ok, I am a history buff - I would put in reply the Allies attempt to attack Germany via Italy, which was then erroneously described by Winston Churcill as the soft underbelly of Europe)

The Germans' fortress was on the west of Kursk. However, they opted to launch their attack from the south and north in an attempt to encircle the Soviet troops and wipe them out.
(Me - Ok, correct)

The Soviet troops almost could not resist the 6,000-strong tank invasion from the south and north, and it was pretty clear that the Russians were very likely to be crushed anytime. But then the Germans halted their assault due to supply disruption.
(Me - Wrong - The Russians broke the Germans' communication code and know the enemy were coming. They were prepared and built such a solid defense that the Germans exhausted themselves in the attempt to penetrate it)

Seizing the opportunity, General Georgy Zhukov mobilized his troops to counter-attack the Germans on the west. With most of their troops now bogged down in the north and south, the Germans were unable to redeploy their men to defend and were defeated, spelling a prelude to their eventual surrender.
(Me - The Battle of Kursk was a draw. Hitler pulled back his army due to the huge losses. The Soviets lost even more but they have more resources. The Soviet gain strategic advantage due to that leading them to win the war)

Back to our country. Many people think that the major battlefields in the coming general election will be in Selangor, Perak and Kedah. To be honest, the place that will determine the final outcome is none other than BN's stronghold in Johor.
(Me - What Tay didn't say is that, it is DAP's crucial battleground as they expect to win additional Parliamentary seats here, PKR can only hope for tokens from them while Pas who are to break the Malay votes will get nothing)

States like Perak, Selangor, Kedah and Terengganu are most definitely the frontline states that will see very heavy gunfire.
(Me - BN is secure at least in Terengganu despite Umno's infighting there. Pas is no longer as strong as they are made out to be)

While both BN and Pakatan may lose or gain some seats in these states, or perhaps some state administrations may even change hands after the election, the outcome is nevertheless unlikely to alter the parliamentary tectonic plate post-2008.
(Me - More or less true)

Johor is the biggest unknown. It is indeed a powerful fortress state for BN on peninsular Malaysia, but no one can tell whether it will remain BN's most assured asset.
(Me - Tay, I think you were pretending la - of course it is known - the storyline will be simple - DAP is banking on Pas to break the Malay votes for them while PKR just getting a free ride. The stupid one is Pas lah. I had wrote this repeatedly. DAP is the absolute king of Pakatan in Johor but they know BN is still too strong for them)

BN's two other fortresses--Sarawak and Sabah--are basically heavily secured lots that are extremely unlikely to tip.
(Me - What Tay? Are you trying to suggest Johor will tip? You are a senior writer la, don't make a fool of yourself, ok. Or rather don't try to convince those Pas fools that it is a Pakatan thing. The whole opposition show in Johor is DAP's. Pas and PKR are just comic relief characters in this State. They, in particular DAP may get some extra seats in the worst case scenario for BN but they will not take the whole State)

Johor provides a different picture. It is not that segregated as the two states in East Malaysia while the people have higher political awareness and better access to information.
(Me - Johor may not be geographically segregated, but it is different from the other States in the Peninsular because it always has a good BN State government. Not much corruption, especially under the current administration. Even Johor DAP chief Dr Boo Cheng Hau will agree with me on this.if he is truly an honest man).

Unmoved in March 2008 does not mean Johor will remain unmoved in the coming general election.
(Me - True, but only among the Chinese overall votes. The Malays, despite some stupid Umno people and all stupid Pas people are still solidly with BN)

Moreover, the state has a relatively high ratio of Chinese population: Over 30% in most constituencies and 40% in some.
(Me - Kulai got 58 percent and Gelang Patah 53 per cent of Chinese voters - Tay, go update your figures, ok)

Besides Bakri that is already in DAP's embraces, constituencies like Kluang, Gelang Patah, Tebrau, Pasir Gudang, Labis, Johor Bahru, Pulai, Tanjung Piai, Segamat and Sekijang are all no longer BN's sure bets.
(Me - Tay, you miss Kulai, the parliamentary constituency in Johor with the highest percentage of Chinese voters. What are you trying to do here? You want BN people there to continue to sleep ka?)

If BN loses this important battlefront, its hopes of retaining Putrajaya could be dashed.
(Me - OK, this is true, the road to Putrajaya is via Nusajaya, so to speak, but BN is not going to lose it)

The weakest part of PKR and Pakatan in general lies in its poor organisation and fighting spirit in Johor, as well as their lack of substantial support among the Malay society.
( Me - Tay, you keep repeating the word Pakatan, come on la, its DAP la. What? You don't want the Johor Malays to realise that voting for Pas and PKR is actually voting for DAP ka?)

That said, it will be the parties' strategies and real strengths that will eventually decide the final score.
(Me - OK, fine, I agree with this one, except that DAP may also win more seats due to Malays stupidity either it be among Umno, Pas or PKR)
Posted by BIGCAT at 17:39