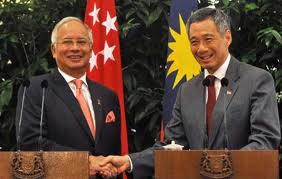 Something strange is happening - Singapore is suddenly so friendly with Malaysia.

They are in fact defending our country, really, I am not kidding you.

Saw an article by Singapore Straits Times journalist S. Jayasankaran, who is based in KL. He rubbished a report by a so-called economic expert who predicted a dire future for Malaysia. I know for a fact that editors of that paper had in the past only published bad things about our country.

But not anymore. I had previously seen some nice stories about Iskandar Malaysia in Singapore's Press. So, this is most likely not a one off thing.
Maybe things are really going to be good between our country and them.

Ok, Singapore Straits Times are very kedekut. I can't cut and paste their articles. But never mind lah, at least they tried to defend us. So the next best thing I can do is to reluctantly cut and paste the one by the pro-Pakatan Malaysian Insider on the ST article.

There are two stories here - the first one is about Singapore ST defending us while the second one is an earlier report by Malaysian Insider which was proudly linked by Lim Kit Siang in his blog to show show how bad our country is.

KUALA LUMPUR, Dec 12 — Malaysia is vulnerable to a sharp Western slump but not as much as experts suggest, the Singapore Business Times said in a commentary today.

Calling downbeat views of the economy “overdone”, the paper’s Kuala Lumpur correspondent noted that Malaysia has so far maintained steady growth in the face of pessimistic market expectations.

“No one country, save perhaps those with very large domestic economies like India, Indonesia or China, is immune from a sharp Western slump.

“But to suggest that the country is in imminent peril of falling from a cliff may be something of an overstatement,” S. Jayasankaran said.

He pointed out exports grew almost 16 per cent year-on-year in October — more than double the seven per cent forecast for the month — on soaring commodity exports and improved production, which offset the impact from falling electronics output and exports.

Malaysia’s newly diversified portfolio of trading partners, including China and India, also continued to support growth even as demand from the developed markets slowed, he also said.

“If the Eurozone and the US were struggling, other emerging economies have stepped into the breach to take up the slack,” Jayasankaran said.

Shipments to China grew by 37.1 per cent to RM8.66 billion in October, while exports to India jumped 76.9 per cent that same month on the back of a new trade agreement.

Exports to Japan also rose 29.6 per cent to RM7.52 billion, mainly to meet post-tsunami and earthquake reconstruction needs and new demand arising from supply chain disruptions cause by floods in Thailand.

Jayasankaran also downplayed a warning by a Nomura International economist that Malaysia would be hit harder than its Asian peers by an economic crisis in Europe due to relatively weaker public finances and dependence on commodities.

Nomura chief economist for Asia ex-Japan, Robert Subbaraman, said last week that unlike most Asian countries, Malaysia will be negatively affected by an expected drop in commodity prices while the government will also find it difficult to keep up stimulus policies.

He said Malaysia ranked third in Asia ex-Japan in terms of exposure to European bank claims, after Hong Kong and Singapore, which could mean a drying up of liquidity should European banks start to cut their exposure to the region.

Figures provided by Subbaraman showed that European bank exposure to Malaysia amounted to US$50 billion (RM155 billion), or about 19 per cent of GDP, double that of the Asia ex-Japan average of nine per cent.

“That is something of an exaggeration,” Jayasankaran said.

“Since the early 1990s, the central bank has pushed foreign banks to incorporate locally which means they actually have capital here and aren’t just representative offices that actually derive their funds from their overseas parents.”

He said this meant there were risk management practices in place to protect local depositors, implying less exposure.

KUALA LUMPUR, Dec 7 — Malaysia will be hit harder than its Asian peers by the economic crisis in Europe due to its relatively weak public finances and dependence on commodities, said Nomura International today.

Its chief economist for Asia ex-Japan, Robert Subbaraman, said that unlike most countries in Asia, Malaysia will be negatively affected by an expected drop off in commodity prices while the government will also find it difficult to keep up stimulus policies.

“Malaysia is one of the economies that will weaken the most; it is in the weaker group of economies,” said Subbaraman at a media briefing here today.

Nomura economist for Southeast Asia Euben Paracuelles said Malaysia’s growth in the first three quarters of this year was largely led by government spending, but as public finances were relatively weak, he doubted that it would be sustainable.

Subbaraman also noted that Malaysia ranked third in Asia ex-Japan in terms of exposure to European bank claims, after Hong Kong and Singapore, which could mean a drying up of liquidity should European banks start to cut their exposure to the region.

Figures provided showed that European bank exposure to Malaysia amounted to US$50 billion (RM155 billion), or about 19 per cent of GDP, double that of the Asia ex-Japan average of nine per cent.

Commodities would dip by 15 per cent if a slowdown hits, says Paracuelles.Only the financial centres of Hong Kong and Singapore had higher exposures, at 77 and 55 per cent of GDP respectively.

“As European banks pull back exposure, it will show up as net capital outflow and availability of funding will start to dry up,” said Subbaraman.

He noted, however, that Malaysia still has a large current account surplus at 13 per cent of GDP, which should help support the ringgit against hefty depreciation against the US dollar, due to its trade performance.

Paracuelles said that if a global downturn happens, there would be a 15 per cent decline in commodity prices.

Petronas said in a briefing last week that it expects oil prices to decline to US$85-87 per barrel next year, from US$110 currently.

“Given the public debt to GDP ratio of 55 per cent, the second highest in Asia, scope to continue with a very expansionary fiscal policy next year could prove to be limited,” said the report.

The report forecast a growth of 3.6 per cent for the first quarter of next year but rising to 7.3 per cent by the fourth quarter to give a full year growth of 5.1 per cent.

Subbaraman also said the risk of a hard landing in China is “not trivial” although the threat is greater after 2013-2014, following the handover of power to the next generation of leaders.