Can we swap status and I become a real Chinese?


Someone called me this morning and complained about the bumiputera status of the Malaysian Siamese community.

It arises from a news that PM DS Najib Razak had a get-together function with the Siamese community yesterday and announced that they are bumiputera. 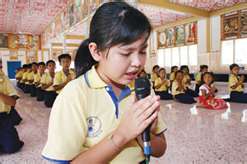 What Najib said was really nothing new, as the status was given to the community since Merdeka  but maybe some people may have heard it for the first time.

There are less than 100,000 Malaysian Siamese in this country. They are mostly farmers living in their villages in Perlis, Kedah and Kelantan.

This person who complained about their bumiputera status asked me how come they got it while other decendants of migrants such as the Chinese and Indians were not given the status.

Well, I tried to explain that the Siamese community have been living in the northern States for generations, and that they are not rally migrants from Thailand. But this was immediately shot down.

"I'm a fifth generation of my family living in this country. How come I cannot become a bumiputera? You yourself on the other hand is just a third generation immigrant, how come you are a bumiputera?" the person asked.

Hmmm...but I let it passed. I know when the talk reached this stage, I better give way. No point in arguing.

So I just said I will check with the NRD if I can transfer my bumiputera status to the person. Honestly, I really don't need my bumiputera status anymore because I'm planning to migrate to Taiwan end of this year. It would be nice if I can have the person's Chinese status in return. All these while also I never asked to be a bumiputera or remember getting some discounted priced stuff for that status.

Of course I was scolded again for trying to be too smart with my answer. But at least it was just for being a stupid irritating dumb ass and not because I am some sorts of  a bumiputera supermacist. Actually, if it was someone else on the other end of the line, I may fight till the bitter end on this...but not with this person. This person is actually a good person except for the bad habit of reading too much DAP propaganda stuff in the internet,,,,I think.

Anyway, I am glad  the person still called me despite knowing I'm a supporter of the evil BN  :)

Ok, a bit about the Malaysian Siamese community, I took from Wikipedia -

Politically, Malaysian Siamese are recognised as Bumiputeras and are given similar status to the Malays, Kadazan-Dusuns, Ibans and Malaccan Portuguese.
Most Malaysian Siamese people are Buddhists of the Theravada sect. Their place of worship is called the Wat. Each Wat has several monks administering it.

Most Malaysian Siamese people lead a way of life similar to the Malays. This is evident especially among the Kelantanse Siams. One could not differentiate a Malay or a Siamese if they are not heard speaking their own language. The only distinctive mark among them is their religion and language. Otherwise Malaysian Siamese are like Malays as they also speak fluent local Malay dialects.
Posted by BIGCAT at 14:11