It was a contest between two Chinese parties for the support of  their community in a country where they are the minority. That's the bare fact which no one should dispute.


Soi Lek - He appeared to be more blunt by telling the Chinese of the dangers they face if they abandon MCA and give their full support to DAP which is an ally of Pas, an Islamic hardline Malay-based party.
However, I believe what he was really trying to tell the Chinese audience is that, DAP may win their votes but its Pakatan allies will lose, and therefore Pakatan will not win the general election to protect Chinese interests as promised by DAP.
This raise a real possibility of BN being in power without much representation from MCA and the coalition forming a government dominated by right-wing Umno which will be even less sympathetic towards Chinese interests.

Guan Eng - He tried to play the Chinese hero character and projected an image of a crusader against a corrupt and evil BN government. It's part of the usual tactic of running down the rival MCA by insinuating it as being an Umno stooge who failed to protect the interests of the Chinese despite the party being part of the government. He also stressed that DAP are more capable of standing up to its Malay allies in Pas and PKR.

Who wins?
I think Guan Eng succeeded more in asserting the DAP's Chinese character. The fact that he was the one who insisted for the debate to be held in Mandarin makes him the winner from the start on this count. However, this will have a far reaching negative implications as far as Pakatan as a whole is concerned. They will lose even more votes of the Malays and other races.
Soi Lek, in a way succeeded in this debate for being able to draw DAP into an open fight. MCA has now shown Malaysians, and especially the Chinese that they are not a totally a spent force and still needed by the community to protect their interests in this Malay-majority country.

Been searching for new thing to update this posting.
Got all excited over The Star headline just now -

Forum kicks off with a bang

KUALA LUMPUR: The Malaysian Chinese at a Political Crossroads forum kicked off with a bang Saturday as MCA president Datuk Seri Dr Chua Soi Lek brought down the housewith his fiery opening speech.
Dr Chua appeared to be metaphorically rolling up his sleeves in preparation for his debate with political opponent, Penang Chief Minister Lim Guan Eng in the evening.

And then, this is all the quote that was taken from the big bang.

"He (Lim) is more interested in issuing countless statements to condemn or challenge others, behaving like a true street fighter. He has forgotten that he has a state to look after," said Dr Chua to tumultous applause.

Yup, that's all. The rest are just the usual background stuff. Chey,  what la you all Star people. So really anti-climax leh..

I think better just wait for the debate.

Apparently, it was DAP's Lim Guan Eng who requested for the debate to be conducted in Mandarin.

“There is nothing racial about it; it’s a national conference consisting of many topics and issues that cover all ethnic groups,” Asian Strategic Leadership Institute (ASLI) director Datuk Michael Yeoh said at a press conference here.
“It (the conference) looks at [the changing of our political structure] and concerns all issues ... (that) every Malaysian should be concerned about,” he added.
Yeoh said the debate, themed “Chinese at a Crossroads. Is the 2 Party System Becoming a 2 Race System?”, was originally to be conducted in English, but was changed to Mandarin following Lim’s request.
“Guan Eng asked, why is a Chinese topic not conducted in [Mandarin]? So we have decided the whole debate will be in [Mandarin],” Asli senior vice-president Ng Yeen Seen explained.
“The (rest of the) conference will be conducted in English, but if the floor wishes to ask questions in [Mandarin], then the speakers will use Mandarin to answer,” she added, saying that most speakers are bilingual. 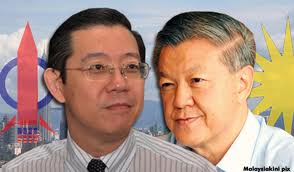 Why? Because Guan Eng, in his unbridled enthusiasm, had in the first place agreed for the debate being in Mandarin, which to me is a big mistake for him.

To me, he had fell into the trap of acknowledging that DAP is a Chinese party and not a multi-racial one as claimed. Soi Lek on the other hand should be ok with the language being used as MCA has no problem of itself being a Chinese-based party in a multi-racial BN coalition.

Ok, just look at the topic they are going to debate on - “Is the two-party system becoming a two-race system?”. What la Guan Eng, you want to debate on something like that in Mandrin? You sure lose one on the perception front.

Trust me, the Chinese do not want a two-race system and that is exactly why the smart MCA PR people choose the subject. In all probability, the two-race system is what we will have in this country after the next general election. The Bumiputera (and other races) on one side and the Chinese on the other. It is already happening in Sarawak, and that is exactly what DAP is banking on to win more parliamentary seats, especially in Johor. The Chinese will be at the losing end in such a system.

Guan Eng , you should had at least insisted for the debate to be in Bahasa Kebangsaan. Now you are reduced to promoting and defending the Chineseness of DAP. Very damaging liao....especially for your Pakatan friends.

Despite this debate being the hotest topic among the Chinese community at the moment, the other Malaysians do not seems to be really interested in it. It has become a Chinese thingy. They will say "Ya la, MCA are Chinese, DAP also Chinese. Let them kung fu each other lah."

Yup, just look at the way the Chinese papers and Chinese-owned Star promoting the debate and then just look at how the Malay and other English papers covering it. Very contrast.

Guan Eng cannot carrying around bluffing people that DAP is a multi-racial party anymore after this debate. That I am sure, especially as far as the non-Chinese are concerned. I know that Guan Eng is a bit childish and not so smart, but to fall into Soi Lek's trap like that, I actually feel a bit sympathetic towards him. Really, I am not kidding you.

Probably Guan Eng has now realised his mistake. That is why he has been calling for follow-up debates with Soi Lek in Bahasa Malaysia and English after this. But really la Guan Eng, it's too late already. Finish the tomorrow's debate first ok?, then talk about trying to get another date with Soi Lek for damage control. Hopefully Soi Lek will be merciful and let Guan Eng have another go.

Oh, btw, I also think Soi Lek will make minch meat out of Guan Eng at the debate. Being a more seasoned politician who knows his stuff very well, Soi Lek will be too much of an opponent for Guan Eng. Well, the last big debate Guan Eng had was with the jaded Gerakan's Koh Tsu Koon and it was more or less a draw. Koh is not even in the same league as Soi Lek. If Soi Lek can survive the sex video scandal, what lah Guan Eng  to him.
Posted by BIGCAT at 14:58