NST 19/02 : PKR president Datin Seri Wan Azizah said problems arising from Anwar's statement in support of Israel has been ironed out and is now a non-issue.

Wah! like that also can ka? So easy liao.

All those Pas people already kena ironed out ka? Sheeshhh.... so much for being Islamic fighters. Not yet sent to fight the IDF sudah kena sterika out by Anwar and his gang. What la you all....

Non-issue? Oi! Those Palestinians are still being butchered la Kak Wan. You don't read papers ka?....internet also got their stories you know.

When I read this posting Istana Sebilliong Ringgit by Rocky, I was so tempted to write a similar one. Got materials already over here.

But on second and third and twenty ninth thoughts, I decided not to.

Not worth it la.

As if people really appreciate it that a corrupted chicken shit pro-BN blogger like me sticking her neck out for them writing about such things.

Rocky different la. They said BN paid him USD10 billion already. That's why he don't mind getting into trouble. Got money already ma. What can they do to him, isn't it? 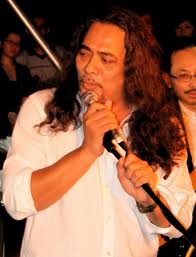 Maybe I should leave it to those brave incorruptible Pakatan bloggers to write about such stuff. Let them once a while take a break from spewing venomous hatred at Umno and take some proper risks to do some good instead.


Ok lah, today is a lazy Sunday. I am going to lay back and listen to this song instead of getting into trouble. This recording was the earliest ever made of this band....by Danish TV for goodness sake. Oh, this one for you too Rocky, salute.

I am going to sing this song to my beloved Johor after the general election.
Posted by BIGCAT at 11:33