JB's Chingay and its political angle by Sin Chew (UPDATED)


Ok, today I feel much better. Things seems to be cheerful here in JB as my Chinese friends being all geared up for tonight's celebrations. I'm going to join them as a spectator of the Chingay procession.


As you may notice from the Sin Chew's article I pasted below, the presence of PM DS Najib Razak at the event tonight is of a very great significance.


Declaring the Chingay event as a national heritage will be a major boost for the improving Chinese support for the BN government. It's a goodwill gesture which will be well received by the Chinese community, particularly those in southern Johor, which will be the main battleground in this State for the coming general election.


Since the Pakatan gang seems to be confident about getting the bulk of the Chinese votes, the parliamentary areas in real danger of falling into their hands are Kulai and Gelang Patah while the State constituencies are Senai, Bukit Batu, Skudai, Puteri Wangsa, Johor Jaya and Stulang.


At the moment, they only got Senai and Skudai.


Read again the Sin Chew article below and you will know that Pakatan will largely depend on their perceived support of the Chinese community in Johor.  So much for their claims that they are not depending on racial politics.


That is exactly why they seems quite perturbed that Najib will be down here in JB for the big occasion. They know that Johor MB Datuk Abdul Ghani Othman has been actively engaging the Chinese associations and getting positive results. Also, MCA and Gerakan have also seems to start being more hard working these days.


Whatever it is, the Chinese community in Johor are not a fanatically chauvinistic lot as the Pakatan gang are hoping. They know what is best for their own community and would not let outsiders tell them what to do. Of that I am certain.

Tomorrow is a big day in JB.

It's the celebrations of the Chingay festival.

PM DS Najib Razak will be here for the occassion tomorrow. He is expected to announced that the chingay event to be accorded the national heritage status, something which the Chinese associations in Johor have always wanted. 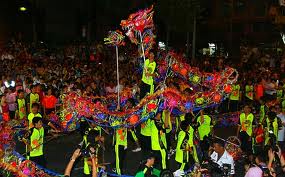 I'm a bit lazy to write today, so, here is a little of the event which I cut and paste from Wikipedia -

Johor Bahru Old Chinese Temple known as Old Temple by the locals, is a Chinese temple located in Johor Bahru. Located at downtown Johor Bahru of Jalan Trus, the temple is flanked by modern skyscrapers. This temple is one of the oldest structures in Johor Bahru. The temple is a place of worship and a symbol of unity among Five Chinese Dialect Groups which are "Teochew", "Hoklo (Hokkien)", "Cantonese", "Hakka" and "Hainan".
In 2007, a Documentary Series called My Roots featured the temple in the episode "Grand March with the Deities".
The temple was built during the 19th Century by then Head of Ngee Heng Company led by Tan Hiok Nee and various Chinese community leaders.
Although there are no actual records regarding the completion of the temple, the plaque and the century-old bronze bell located in the temple shows that the temple is around 130 years old.
In 1995 / 1996, it underwent a major renovation at a cost of MYR1.5 million. Much of its cultural aura was preserved, and important relics such as the century-old bronze bell, joss stick pot and wooden tablet remain.
The temple hosts 5 Deities. There are:
Yuan Tian Shang Di
Hong Xian Da Di
Gan Tian Da Di
Hua Guang Da Di
Zhao Da Yuan Shuai
Each of the deities are separately worshipped by "Teochew", "Hoklo (Hokkien)", "Cantonese", "Hakka" and "Hainan" people
Every year in the first lunar month of 20-23rd , the Temple organizes its annual Chinngay known as the Parade of Deities.
The Chingay parade lasts for four days. The climax of the parade is on the night of the 3rd day when the Deities parade around the Johor Bahru Town Centre.
The annual Chingay has attracted more than 300,000 people to march around the major roads of Johor Bahru together with the 5 Deities being worshiped in the Old Temple.


And here is a take by Sin Chew Daily on the political angle of the big event.

Prime Minister Datuk Seri Najib Razak will attend the chingay parade organsied by the Johor Bahru Old Chinese Temple on 12 February 2012. It is indeed an unprecedented major even in the history of the century-old temple. Not long ago, the Prime Minister has also announced that the parade has been awarded national heritage status by the Government.

As the next general election seem to be approaching, the election atmosphere has inevitably filled the air, including the annual chingay parade.

Interestingly, Johor will show its unparalleled political status in the next general election.

Traditionally, Johor is a fortress of the BN. It is another fixed deposit state of the BN carrying high expectations, in addition to Sabah and Sarawak.

Meanwhile, the Pakatan Rakyat has also listed Johor as a frontline state, and even called for a regime change.

DAP Parliamentary Leader Lim Kit Siang, however, has made it very clear that the Pakatan Rakyat must achieve good results in Johor, but it does not mean that they want to take over the state government. "A shift in one-third of the seats towards the opposition is enough to signal a major change in the national political landscape," he added.

In other words, Lim hopes to realise the dream of taking over the federal regime through winning one-third of seats in Johor, Pahang, Sabah and Sarawak.

In fact, Lim understands that winning one-third of seats is a better way of saying to encourage party members and supporters. To put it negative, it means that it is quite impossible for the Pakatan Rakyat to win the federal regime unless if it is able to gain one-third of seats in Johor, Pahang, Sabah and Sarawak.

As for taking over Johor, it is obvious that Lim is not having the confidence to do so yet at the moment. It might be possible to achieve after two or more general elections. The most important factor would be the attitude of Malay voters.

Johor PAS chief Mahfodz Mohamed also admitted that it is more difficult to fight for Malay votes in Johor, compared to Chinese and Indian votes. According to him, a poll showed that 70% of Chinese voters and 50% of Indian voters are supporting PAS.

Since it is unlikely to take over Johor, is the target of winning one-third of seats in Johor more pragmatic for the Pakatan rakyat?

There are 26 parliamentary seats in Johor and the current situation is, the BN is holding 25 seats with 16 seats occupied by Umno, seven seats by the MCA, one by the Gerakan and another one by the MIC. Meanwhile, the Pakatan Rakyat is holding only one seat, occupied by the DAP.

It means that the Pakatan Rakyat must win another eight seats to achieve the target of one-third, or nine seats.

For the Pakatan Rakyat, the Johor Umno is too strong and thus, the eight seats eyed might be occupied by the MCA, Gerakan and MIC. However, would the anti-incumbent fever strong enough to help the Pakatan Rakyat win nine seats in Johor? Obviously, it is a big challenge that even requires a little miracle to achieve.

In any case, the battle in Johor affects the federal regime and thus, it is worthy of our patience to wait and see the move of Najib at the chingay parade!
Posted by BIGCAT at 14:20