Today there is going to be a small demo by JB MCA and Gerakan youths over the toll charges at the newly completed Eastern Dispersal Link (EDL) of MRCB. 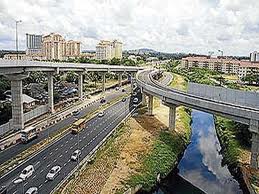 This is a hot issue here....eerrr, among those who frequently travel to Singapore. The Pakatan people have been going to town about it. Make it as if the evil BN government is sucking the rakyat's blood again.

These people said they don't like the toll charges as they are imposed at the CIQ of the Causeway. Meaning that those coming in and out of Singapore will have to pay it even if they do not use the EDL after leaving the CIQ, such as going to the Inner Ring Road or Stulang.

What they want is for the toll charges to be imposed only on those who use the EDL, and not on those going in and out of Singapore but choose to use other routes.

As it is today, the EDL is free for those who use it, unless they go to or coming in from Singapore.

Hmmm...if cannot, never mind lah. MCA is going all out on this issue. Dr Chua Soi Lek, their president said the other day that the government had agreed to review the matter....so, actually no need to demo demo. Bising kacau orang saja la itu.

BTW, most Malaysians working in Singapore and living in JB go there by motorcycle or bus. No need to pay toll. Bus fare probably a few sen more expensive. That's all.

Here is a bit on EDL, courtesy of Wikipedia -

JB Eastern Dispersal Link (also known as Johor Bahru Eastern Dispersal Scheme) is a new expressway in Johor Bahru, Johor, Malaysia. The 8.1 km (5.0 mi) expressway will connect the end of North-South Expressway Southern Route at Pandan to the new Sultan Iskandar Building CIQ Complex in the city centre. It will act as bypass to CIQ complex without using Tebrau Highway (Federal Route Jkr-ft3.png) to the city centre.
Posted by BIGCAT at 12:12