I think I am now a fan of Erykah Badu. 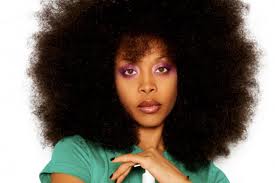 Her reaction to the ban of her concert by the Malaysian authorities indicates that she is one cool lady.

Too bad that The Star screwed up her concert.

Here is the story by Associated Press -

Erykah Badu Sad But Not Angry Over Malaysian Ban

by The Associated Press
KUALA LUMPUR, Malaysia (AP) — Soul singer Erykah Badu said Wednesday she holds no grudge against Malaysia's government for barring her from performing after a photograph of her body art offended some Muslims.
More than 1,500 people had bought tickets to watch the Grammy-winning American singer at a Kuala Lumpur auditorium Wednesday, but Malaysia's information minister announced on the eve of the concert that it could not proceed because a promotional photo of Badu with the Arabic word for Allah painted on her bare shoulders was "an insult to Islam."
"It's sad, because we traveled a long way," Badu told a news conference. "But I'm totally understanding of (the minister's) protection of the laws and its people. He doesn't want anything to happen. I'm good with that."
The photograph ignited criticism from some politicians and religious groups in Muslim-majority Malaysia after a newspaper published it Monday in a feature to promote Badu's show. The daily has since apologized for what it called an "oversight" that led to the photo's publication.
Badu, 41, said the photo was inspired by images from "The Holy Mountain," a 1973 surrealist movie by Chilean-French filmmaker Alejandro Jodorowsky.
"I think art is often misunderstood in the realm of religion, and it's OK," she said. "In America, it's a lot different. Art is also misunderstood but it is not such a harsh gesture to promote the names of God. I am learning and understanding about Islam in other countries more as we travel."
Information Minister Rais Yatim said Malaysia's Cabinet endorsed the ban Wednesday. Police feared that if the concert went ahead, it could cause "various situations that may lead to social excitement, and quarrels may break out due to religious sensitivities," the national news agency, Bernama, quoted the minister as saying.
Public reaction to the concert ban has been divided. On Twitter, many Malaysians, including Muslims, accused the government of intolerance, but others praised authorities for being firm about defending religious principles.
Badu said she would "absolutely" welcome another chance to perform in Malaysia someday. She is scheduled to sing at a jazz festival this weekend in Jakarta, the capital of neighboring Indonesia, the world's most populous Muslim nation.