Shrek and my boredom


Staying cooped up in this room and bored half to death. It's too cold to go out.

It's Shrek at the moment. You know, that jovial green ogre. Watched it before, but never mind lah...it's very nice funny movie la.

The one I'm watching now is the first where Shrek rescued Princess Fiona from the dragon and later fell in love with her and stuff.

I don't really like the sequels though, as they tried too hard to be as good as the first. Got all complex and too campy. And that donkey was too damn irritating in the sequels.

Anyway, I wish I can rewrite the Shrek story. It would be something like this....

After Shrek and Fiona had their first kiss, Fiona turned into a real princess and not a female ogre like in the movie.

But Shrek don't mind as he love her very very much.

Fiona also said she love Shrek very much despite him being what he is, an ogre.

I think a love story between a beautiful princess living in a palace and an ogre living in a swamp will be more interesting. How they accept and truly love each other despite their differences would be very nice and funny to watch. 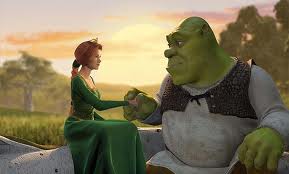 Hmmmm....this what happened when I'm bored. Writing gibberish....eh, sorry la for wasting time of those who read this. Don't be angry ya, I'm like this once in a while only....

ps. For better reading, go to the blogs of A Voice and Big Dog. Their latest postings on Johor are very interesting.
Posted by BIGCAT at 16:48