It's almost 2am and I can't sleep. Suddenly feeling hungry. No proper food in the kitchen. End up cooking maggi kari. Put in an egg and a huge onion. Quite nice also. Still...so much for being a rich corrupted pro-BN blogger.

I am now lying on the floor in front of my new second hand netbook. Really love this thing. No need to go to the cybercafe any more. Can write anything any time now.

My next big project is to buy a computer table. Must find one which is cheaper than this netbook. Budget for the table should be around RM150. Maybe can find some second hand stuff again.

Ok, maybe I will buy that after getting a new pair of shoes. The one I'm wearing to office now has really worn out. Hmmmm....see lah how.

I know, most of those reading this probably think that I am bluffing. But those who really know me actually would think that I'm being mild. Either way, I don't care lah. I'm now just having itchy fingers and want to write something. Crap also never mind. Anyone want to read or not, not my problem.

Actually, my salary is not so bad. It is just that I have lots of commitments. After taking care of things, I don't have much left for myself. That's why I have to live a hobo life like this.

Anyway, I think my life will be better after the next general election. BN will retain Johor, hopefully, by wiping out the Pakatan people (which is hard but not impossible). I will then be able to do what I really want and leave this beloved State of Johor.

Let others worry about Johor without Ghani Othman as MB. I am quite certain now he is retiring after leading Johor BN through the election. My bet is now on Khaled Nordin. Sorry YB Osman Sapian. I know you are the leading candidate now, but I'm just being realistic about the choice between you and Khaled. Well, good luck Johoreans.

I have made some plans. Even scouted the place I'm heading. Probably end of this year. Hopefully PM will call for the election around June. Just nice for my plans to fall into place.

This is the place I am planning to go. 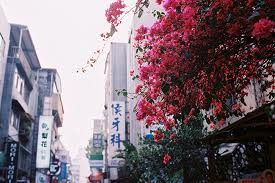 It is really a nice place. I am going to buy a bicycle and use it to go to class which is somewhere near where this picture was taken....cycling in winter....very cold, but so nice  :)
Posted by BIGCAT at 02:50