The most worrying thing about the Lynas rare earth issue to me is not the radiation risk as claimed by the pro-Pakatan demo people.

The scariest thing to me is that the whole issue seems to have developed a racial flavour on its own.

Yes, there are some Malays and other non-Chinese taking part in the demo in Kuantan on Sunday, but they were heavily outnumbered by their Chinese counterparts.

And yesterday, as I went to buy a newspaper at a shop, I noticed that all the Chinese newspapers put the Lynas story on their front page. Each splashed huge pictures of the thousands of protesters. The camera angles were such that the crowd looked really big in those pictures,  The Chinese-owned The Star followed suit. The other English and Malay newspapers however seems to shy away from doing so,

The Lynas demo in Kuantan on Sunday was really a DAP show. eventhough Anwar Ibrahim as usual tried to hijack it. Guan Eng's people came down from all the way as far as Penang to make sure it was a success.

Indeed it was a success....not in highlighting an environmental issue, but rather in proving the DAP's capability in galvanising the Chinese community's support for the party.

Personally, I'm of the opinion that the Lynas issue was at best just an excuse for the demo which in actual fact is the first demo dominated by Chinese participants. DAP had managed to convince the Chinese that they had cornered the BN government not to be harsh on them.

The Lynas demo was arguably the biggest open air public demonstration dominated by Chinese protesters since 1969. 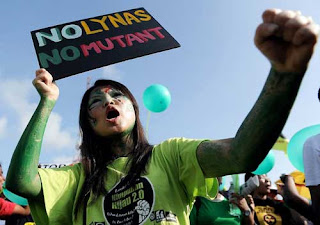 Auntie, the only mutant in Kuantan last weekend was that funny PKR ostaz  who get caught la....and he became a mutant simply simply one. Lynas plant not built yet liao.
Posted by BIGCAT at 23:57