All the best Tuan Syed

Datuk Syed Nadzri Syed Harun, the outgoing NST group editor had just gave his final speech to members of the newspaper's editorial staff. Today is his last day after 33 years at the newspaper. 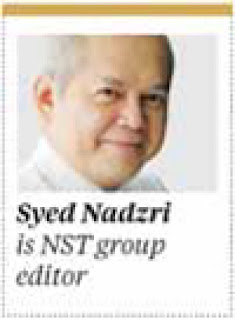 In his speech, Syed advised the NST people to be focused on their job and avoid the destructive practice of office politics. He called on them to be united in facing the challenges which beset the once mighty NST.

As for his future, Syed said he will not be retiring per se as he will be engaged with other occupations.

I first met Syed many years ago. He is a pleasant and highly intelligent man. Always appeared to be calm under pressure, Syed is indeed a cool guy. He is also to me one of the best writers in this country. His trademark should be his subtlety in conveying his thoughts. There are few Malaysian writers better than him that I know.

The best quality of him as a journalist, however, as far as I'm concerned, was his total lack of malice in his writings. He is indeed the true gentleman of Malaysian journalism, and perhaps one of the last journalists of the old school.

To Tuan Syed, all the best and may Allah bless you with many happy and prosperous years in future. Thanks for everything.

(Note: All uncalled for comments will be spiked off for this posting.)