It is almost certain that DAP's Kota Laksamana assemblywoman Betty Chew will not be defending her seat in the coming general election.

Betty, who is the wife of Penang chief minister Lim Guan Eng, was quoted by sources close to her as saying that she intends to let a younger DAP leader defend the seat in Malacca which she holds for the past three terms.

It was however not clear whether Betty is going to instead contest in Penang or  be a full time first lady of Penang. 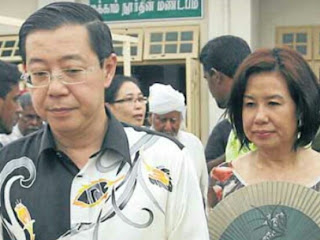 It was understood that there were concerns that Betty may face some difficulties if fielded again in Kota Laksamana due to her lack of presence there for the past four years as she have to spend more time with her husband and children in Penang.

Her decision not to defend the seat, was however said to be made by herself. It is expected to be officially announced over the next few days.

Sources indicated that Betty had first considered the move since last year, sometimes after the Sarawak state election.

This coincided with rumours that her husband was having a "special relationship" with a female aide. Both, Betty and her husband had since denied the rumours and insisted that there was nothing wrong with their marriage.

It was nonetheless almost certain that DAP will retain the Kota Laksamana seat which constituents consist 85% Chinese, 11% Malays, 3% Indians and 1% other races.