Early Chinese of my life

There is a feature on my face which makes me look a bit Chinese. My arwah mom used to tell me that I probably got that feature because back then when she was pregnant with me, she used to go and watch those travelling Chinese opera shows whenever they came to the new village near our home. My mom who didn't understand Chinese at all said she loved watching the actors in their colourful costumes and make-up. There was also that festive atmosphere to cheer up those in the audience. She didn't understand what the acting was all about but still enjoyed it immensely. Anyway, there was not much other entertainment around during those days. Our family home only had TV many years after I was born.

The first Chinese I know was my big sister's school friend. I was about five years old at that time. She lived in Kulai, a town near our home. My sister used to take me on a bus ride to meet her. Her home, compared to our barrack quarter was quite grand. Whenever I think about those visits to her home these days, I'm quite pleased with the thought that a relatively well-off Chinese girl had wanted to be a good friend of my sister, who is from a poor Malay family. Of course, back then I never thought about such thing. I had mostly thought about that very nice kaya bun her mother gave me with the usual assurance, "Ini tada babi punya." The last time I met her was many years ago when she turned up for my sister's wedding. She had taken the trouble to travel quite a distance to be at her best school friend's wedding.

I attended a primary school which students were almost all Malays. There was a single Chinese who enrolled at the school during my time there and he is my first Chinese friend. He was somehow very popular among the other kids. He joined almost all extra-curricular activities in the school, including the kompang troupe. I  asked him why he enrolled at the school knowing well that it's a Malay school. He said he was not sure himself why his father, who was a wealthy businessman had insisted on him to study there. Probably, his father wanted him to have Malay friends, he said. I had met his father a couple of times and he appeared to be an ordinary Chinaman. Anyway, someone did told me that my friend once joined the other kids in the kompang troupe for a prayer at the mosque in front of our school. When I asked him about it, he said with a laugh that there was nothing wrong with praying to any other God. Later on, I did well in my Peperiksaan Penilaian and was the best student in the school. He did quite ok too, but not as good as me. The last time I saw him was just before I went to the boarding school for my secondary education. Many years later I heard that he was living in London and doing well.

The first Chinese I fell in love with was a character in a drama I watched on Singapore's Channel 8 when I was a kid. It was one of those long winded drama serial of ancient time based on those classic Chinese novels. I was a big fan at that time. The plots of these ancient Chinese dramas were intriguing and the characters were equally colourful. Among my favourites were The Immortals, Princess Chan Pin and Swordsman Chu. The only irritating thing was that the heroes always have many girls going after them, and that the girls, despite their jealousies always ended up working a compromise of big sister little sister kind of understanding much to the convenience of the hero. I guess, that's the ultimate China men's dream. I guess the China men's dream isn't that much different from the Malay men's dream.

Ya, men are all bastards...irregardless of race.

Eh, had you all watched the Zhang Yimou-Gong Li classic Raise the Red Lantern? 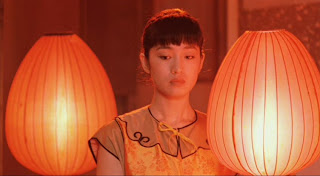 If you haven't, do give it a try, ok? Then you will agree with me on this one.

I got other Chinese tales in my life, but I think I'll tell them some other days. This one too long already. Actually I am writing this posting just to while my time away. Still lying in bed recovering from my fever and don't know what else to do.
The political side of these stories? Nothing, really. These are just stories about the early Chinese in my life.

Ok, I need to get up and get some fresh air outside my room. You all have a good day. Cheers.
Posted by BIGCAT at 10:13