Horrible jam - do something, please

Was caught in the horrible traffic jam at the highway on my way back to KL after the long weekend yesterday. What was supposed to be a three and a half hour drive lasted almost nine hours. That was continous driving except for a single pit stop for fuel.

It was fortunate that I decided to make a detour off the highway to filled up the tank when I realised how bad the jam was going to be. The first RnR area of the highway  where I had wanted to stop for fuel were packed. Later on I saw quite a number of cars stopping on the emergency lane, probably because they ran out of fuel. 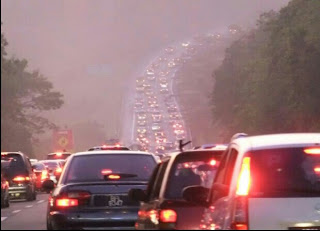 What however made me so dissapointed was the total lack of pro-active action by the highway authorities to ease the suffering of the motorists. They should had anticipated the whole thing and did something to mitigate it.

For instance, a stretch of the highway was hold up due to a bottle neck at a toll plaza. When I reached there, there were only one Smart Tag lane, two Touch N Go lanes and three cash lanes. Can't they do something to increase the number of Toll counters? Honestly, I don't think they should even be collecting toll at a time like that.

And there were apparently total lack of enforcement of the law. With all due respect for our policemen, I may be wrong, but throughout my ordeal yesterday, I didn't see a single traffic policemen managing the situation. I stand to be corrected but what I meant, the jam could be not so bad if there were policemen to stop motorists from jumping the queue by going on the emergency lane, which I think made things worse.

This problem has been around for years. Everytime there is a festive season the same thing would happened. Can't the authorities do something to mitigate the problem? Surely there must be a strategy which could be implemented. Please don't tell me there is nothing to be done and that we have to accept this problem as part of life.

There must be something that can be done to solve this problem. I hope the PM will instruct his people to look into this matter. All those not so useful people at Pemandu for instance could be made to think of a solution to this problem instead of cooking up some figures from thin air into ear candies for the BN leaders.

People want to see results on the ground lah...and this is one area they should be working on.
Posted by BIGCAT at 06:55