One of the things which really makes me uncomfortable is to be in the presence of people who try to promote themselves by grovelling to their superior. The malay word for it is mengampu or membodek. 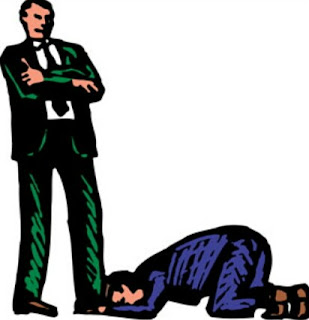 But, most of the time, such self degrading tactics worked. Well, in Malaysia at least. I have seen people with no real talent whatsoever except membodek reached the pinnacle of their organisation....and of course eventually screwed things up. This happens a lot actually.

I'm not really sure how it works, but probably men are all suckers for flattery. It's the ego thing, I guess. Lady bosses, I noticed were less susceptible to these sorts of nonsense. But then again most bosses are men, aren't they?

The same things also in Malaysian politics. The way they mengampu and membodek is really amazing. I'm not really sure how they managed to do it - lowering themselves to that level.

There will be more and more of these activities as these people jockied themselves for candidate slots of the coming general election.

This is the way things are mostly on both sides of the political divide. The end result is leaders who feel they can do no wrong. They become something of a demi-god. The Chinese word for it is tokong, if I'm not mistaken.

For muslim leaders, especially those with Islamic credentials, they would be regarded as some sorts of saints whose actions and words must be accepted without question by those who want to membodek them. These are the inheritors of the prophet (pewaris nabi), so they said. Those who try to argue against the edicts of these leaders were branded as traitors and deemed as bound to go to hell after they died. Surely good and soothing for the ego of the saintly leaders, eh.

For non-muslim leaders....errr, this one you all go and google Lim Kit Siang or Lim Guan Eng for illustrations, then you will see for yourself the history of DAP ever since the party was dominated by the father and son. You want to see bodeking DAP style? Just wait till their cybertroopers commented about this posting.

BN leaders and followers are also guilty of all these stupidity. Sometime I felt like vomiting blood watching the way they membodek  their leaders.