Port Klang could be site of next Dredd movie (UPDATED)

(Note: Updates at the second half of this posting)

Been busy the whole day. No time to do any posting in between work.

Only now back in my place, that I can lay down and rest and think of something to write.

Well, looking around this room, I think some of the commentators were right.....I do need to stop living like a bum. I admit, I'm really pathetic when it comes to my living condition.

Very well, I'm hereby making a resolution; I'm going to buy a bed. And I am going to save some money for it. And I will not let this endevour to fail, like my laptop project. Don't want anyone to donate me a bed, like the laptop thing. Honestly, it's embarrassing. So, before the end of this year, I must have a proper bed, ok?

Ok, having said that, let me confess that I do miss my life in JB. Klang Valley, is to me, such a miserable place.

The traffic jam is enough to drive me crazy.

I actually live here for many years a long time ago. I don't really like it back then. But now it seems to be even worse.

Inner city KL for instance looks quite much more run down than before. The Petaling Street-Central Market area looks distinctively shabby now to me. In fact, the stretch of Jalan Pudu could actually be used as the set for the ultra violent scenes in the next Judge Dredd movie due to its unfortunate condition.

If people in JB want to bitch about the way road upgrade works being an eye sore due to the haphazard ways of developers in Iskandar Malaysia, then they should try take a drive along Jalan Pudu.

And for an even better filming site of the next Dredd movie, the producers should  really try Port Klang. The place looks dreadful and the crime rate now probably could rival Judge Dredd's MegaCity1. 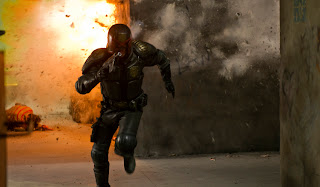 It also reminds me a bit of a drive I had through the slums of Mumbai.

BTW, what had the Selangor's Pakatan government done for the place since they took over in 2008?

Pakatan on the other hand is HOLY and GOOD. So, now that they are in power in Selangor for the past four years, they should be doing something by now, aren't they?

So, why didn't they?

Real crap, aren't they. Talk only all the time.

Meanwhile, here is a good news for Johor -


Johor is to emerge as the richest state in Malaysia by 2025, overtaking Selangor, if the current trend of development pace and investment inflows continues, an analyst with an investment bank said today.

Dr Nazri Khan, Affin Investment Bank Vice-President and Retail Research Head, said the projection was not something impossible to achieve with Iskandar Malaysia, one of the five economic corridors in Malaysia, having attracted more than one-fourth of the RM383 billion total investment target by 2025.

He said the economic growth brought to Johor by Khazanah Nasional Bhd, the government's investment arm, is seen as among concerted initiatives by the government to establish an economic hub in Johor outside the Klang Valley.

"We will see Johor transform into an Orlando in Florida and become Asia's Theme Park Hub with the presence of at least four theme parks in the state.

"They include Legoland Malaysia which opened recently, Puteri Harbour Family Entertainment Centre and Austin Heights Water Theme Park is due to open its doors soon. All these parks will provide ample jobs to our youths," he said.

The 2012/2013 Economic Report issued by the Finance Ministry on Sept 28 said job opportunities in Johor are expectex to double when some projects come on stream in the next five years such as Pinewood Iskandar Malaysia Studios, MSC Cyberport City and Urban and Resort Wellness.

At the same time, Nazri said efforts to attract cash-rich Middle Eastern investors, who have the capital to invest, must be pursued to maintain the development momentum in Johor.

He said the massive oil and gas project in Pengerang is being initiated at a timely juncture when the world demand for oil and gas was spiralling.

"Moreover, Pengerang's demographic location in the middle of the international shipping route to Indonesia and Singapore provided an added advantage to us than to our neighbours," he added.

Meanwhile, a restaurateur in Skudai, Mohd Kassim Ali, 52, readily acknowledged that he could feel the spinoffs emanating from Iskandar Malaysia development.

"When I first started this restaurant business 10 years ago, there were not many customers then, but now I can sense the change over the last one year as a result of the development impact brought about by the government.

"My income has also increased by about 30 per cent now, more so after Legoland Malaysia was opened. I think the development pace in this city will accelerate further when more development projects planned by the government get off the ground such as the Puteri Harbour," he said.

He said the number of Singaporean customers has also increased since Legoland Malaysia, the country's first theme park of its kind, was opened to the people on Sept 1.

The feverish pace of development in this state will provide more job opportunities for Johoreans, he added.

A Johorean, Mohd Salleh Ali, 46, said at one time, the youths, including from Johor, have to move to Kuala Lumpur to find jobs but now that trend is slowly and surely changing.

With the oil and gas project in Pengerang and with various other development projects in the drawing board under the Iskandar Malaysia economic corridor, Johor has become the latest trade focus in Malaysia, he said.

"Johor has become the focal point now as people from throughout the country are flocking to the state in search of high-paying jobs," he said.

Development projects implemented by the state government with the support of the federal government have given an "assurance" to Johor-born school leavers of ample job prospects and a decent income, he added. -- Bernama