Since I can't seem to be too humorous about Johor politics today without causing any offense to someone, I think I want to instead put up another posting on the Chinese schools issue.

Got a call earlier in the day from my friend who is a Chinese school graduate and we talked a bit about the issue.

"I think they are getting a bit too much," she said, in reference to the uncouth behavior of the crowd at the DAP-backed Dong Jong Zong's rally in Kajang yesterday.

It was heartwarming to know that my friend, who is also a DAP supporter could still think rationally and not be blinded by party loyalty.

The Chinese educationists, who aligned themselves with DAP in the hope of becoming heroes of their community may find that they are not fully supported in their actions by even DAP supporters such as my friend.

Putting the Chinese schools and their students on the firing line in the political battle between DAP and its Pakatan allies against BN could turned out to be quite disastrous for the DJZ.

Also here, I would like to extend a salute to MCA's Deputy Education Minister Datuk Dr Wee Ka Siong for being very brave while facing the hooligans at the rally yesterday. He handled himself admirably considering the circumstances. 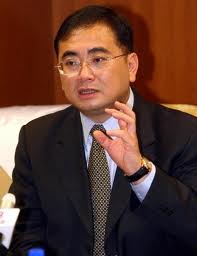 YONG PENG: Over 100 people gathered here to show support for Deputy Education Minister Datuk Dr Wee Ka Siong over the treatment he received at a rally over the shortage of Mandarin teachers in Kajang on Sunday.
Dr Wee, who is Ayer Hitam MP, was verbally abused at the rally organised by at the United Chinese School Committees Association of Malaysia (Dong Zong) to address the teacher shortage issue.
A few protesters allegedly threw water bottles and one tried to punch him. Dr Wee later that he was only “lightly hit on the face.”
A resident, Sam Hin Hoo, 70, said such incidents should not have occurred.

Residents and NGO representatives showing their support for Dr Wee at a gathering in Kampung Baru Yong Peng.
"Manners are very important and violence is definitely not our culture. We are not against the rally but it should be fair and peaceful.
"We know how much Dr Wee as an elected representative has done for Chinese education," he said at the gathering of non-governmental organisations and residents of four new villages in Jalan Meng Seng here on Monday.
They held placards condemning the violent acts against Dr Wee, with some saying "Ka Siong, we are with you."
Chinese temple representative Lee Tee Siong said resorting to violence would not help in resolving issues.
"We are also concern about the future of Chinese education but violence is not the way. It must be stopped at once, otherwise it will continue to happen, he said.
Ayer Hitam Gerakan division chairman M. Nathan, who led some 20 members, said the protesters should have respect for each other when expressing their views.
"Dr Wee is approachable and problems can be resolved in a proper way," he said.
Batu Pahat Kwangsi Association chairman Howard Lee said in a statement that one should not act for political gain because Malaysia is a multiracial country.