Johor BN's preparations for the coming general election are going smoothly. This was acknowledged by both PM and DPM when they were in the State last week.

Najib seems to be satisfied with Johor's BN efforts after briefed on the situation on the ground during his meeting with the State Umno leaders at Tanjong Puteri Resort, Pasir Gudang on Saturday. 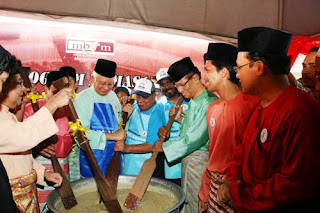 Muhyiddin had several days earlier said Johor BN chairman Datuk Abdul Ghani Othman is doing the right   thing with his overall strategy and personal visits to the peti-peti undi areas. Such an endorsement from his old Muar High School classmate should mean a lot to Ghani. Muhyiddin made the statement while visiting Kulai is black area.

Kulai Umno division chief Datuk Adam Hamid, who is a close ally of Muhyiddin, should get the message, I guess. From what I heard, Adam does not think too highly of Ghani's strategy. Hopefully, he will change his mind after what Muhyiddin said that day.

As it is should be with everyone else in the party, the main thing now is for BN to win the election. The internal struggle and huge egos should be set aside for now. All the ships must sail in the same direction. Otherwise they will be picked off one by one by the enemies.

For those who wants so much to become the next Johor Menteri Besar, there is no need to be over enthusiastic about it. Work to win the election first. Rest assured that Ghani is retiring. He had repeatedly made his intention known to everyone, including Najib himself. I personally wish that he gets to retire.

The MB's job is definitely not easy if it is to be done properly with integrity and sincerity. It is not a lubok of riches where one and one's cronies could use the power to get what ever they want. It's a job where the rakyat's interests need to be protected from all those hungry wolves who don't care about anything but their own tembolok. I pray that the next Johor MB is not one of those wolves himself.

BTW, Ghani's visits to the peti undi areas is at its final lap. Of all the critical areas, Tanjong Piai is the only one to be completed. Nonetheless, I heard a lot more works were to be done such as follow-ups of those visits and continous monitoring and adjustments on the ground.

Whatever it is, I think Johor BN will be ready once Najib set the date of the general election.

My perdiction of the outcome is that except for DAP which may win a few seats in areas such as the Chinese-majority Kulai, the rest of the Pakatan people in Johor will be wiped out....that is if everyone in Johor BN could from now on concentrate their energy on winning the election instead of trying to kill each other off to further their personal interests.

One last thing, feedbacks from the ground indicate that BN stands a good chance to get back the only parliamentary seat in Johor currently in Pakatan/DAP's hand - Bakri.
Posted by BIGCAT at 11:20