Chinese schools in this country are now facing the biggest threat to their existence....and this threat comes not from the ultra-Malays or other Chinese-hating group of people.

Chinese schools are actually protected by the government from those sorts of nasties.

What the government can't protect the Chinese schools from, were threats posed by the extremist elements within the organisation which is supposed to be their guardian, the Dong Jiao Zong, which is the combination of DongZong (federation of Chinese schools associations) and JiaoZong (federation of Chinese teachers associations).

As I had heard earlier, they are going to have a rally to protest what they described as the government's dishonesty in solving the shortage of teachers at Chinese schools. The rally was supposed to be held at Kolej New Era, Kajang Selangor on March 25.

Now, what really got me worried was when DAP declared their open support to the protest by Dong Jong Zong, which is almost certain will turn the whole thing into another anti-Lynas sorts of a rally - a legitimate cause hijacked by unscrupulous politicians.

DAP vice-president Tan Kok Wai said the party will mobilise its members to attend the rally in full force.

Unlike Lynas which was masked by its environmental theme, this so-called "Save Chinese Education" rally will be purely racial in nature. Chinese protesting against a perceived threat against their Chineseness.

With a political party like DAP taking an active role in the rally, the atmosphere will definitely be very combustive indeed.

The rally will be aimed at protesting the government's plan to send teachers, who are not well-versed in Mandarin (read - non-Chinese teachers) to Chinese primary schools. It was also reported that the rally was also aimed at forcing the government to pull out non-Mandarin speaking teachers out of Chinese schools.

If those objectives are not those of racialist extremists', then I don't know what I should call them. Don't they ever think how the non-Chinese will react when they get to know about such demands by the Chinese educationists who are supposed to be the most respected people within the Chinese community? Why must they want to chase away those non-Chinese teachers just because they can't speak Mandarin?

Why can't they at least organise Mandarin classes for those teachers instead of organising the rally?

I have to admit that I am totally dissapointed with especially members of JiaoZong for letting the whole thing be hijacked by the extremists among their rank, and those of DongZong. I have always respected teachers of Chinese schools for their ethics and dedication. Letting themselves be dominated by the extremists is really sad.

Their reckless act of opening the doors to DAP political opportunists who have no sincere love for the Chinese education system will definitely endanger the Chinese schools. 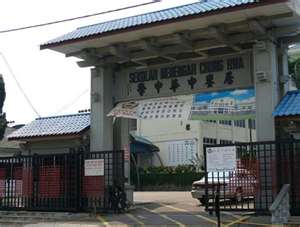 I hate to imagine what will be the future of the Chinese schools once they were stigmatised by the taint of DAP and their hypocritical racialist political posturing.
Posted by BIGCAT at 23:23