I'm putting aside for now the DAP's Lynas radioactive Chinese scare crap. Quite a few postings on it already. If there are still those who can't get it what Guang Eng gang really want out of the thing, then it's none of my business anymore. Saving the environment my ass la Guan Eng.

Well, want to write about other things also leh.

The Girl with the Dragon Tattoo. Gripping like hell. 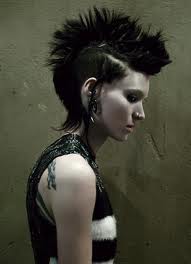 Mara was nominated for Best Actress during the recent Acadamy Award for her portrayal of the character Lisbeth Salander in the movie but didn't win. Too bad since she was so damn good as that character. Watching the movie, I almost wished that I'm a lesbian....go and watch it (try to find the uncensored one) and you will know why I said that.

The movie is an adaptation of a novel. Here is the background from Wikipedia -

The Girl with the Dragon Tattoo (original title in Swedish: Män som hatar kvinnor – "Men Who Hate Women") is a crime novel by Swedish author and journalist Stieg Larsson. It is the first book in the trilogy known as the "Millennium series".
At his death in November 2004, Larsson left the three unpublished novels that make up the trilogy. They became posthumous best-sellers in several European countries as well as in the United States.

Actually, the movie leaves me with the impression that men are all bastards.

They will cheat and abuse at the expense of their women whenever they have the opportunity. Every single one of them....including the pious holy ustaz types.

But I don't blame men for being bastards, because I think they were born weak with such characteristics..

The fault actually lies with women if they let themselves be conned by men.

We know that men are natural-born bastards yet we let them do all that kind of nonsense to us, so who's to blame?

Ok ok, I know, life is more complicated than that....but seriously, for goodness sake women, stand up to your men lah. Don't let them push you around too much, ok?

Now, come to think of it, why don't all women in Malaysia set up their own party.

Parti Wanita Malaysia (ok, the name can be changed later to something more cool) which is exclusively for women.Half of the population are women what. What's wrong with that?

The other parties were in fact set up along similar categorized population  percentage :
Umno, Pas - about 55 per cent Malay Muslims

DAP, MCA, Gerakan  - about 28 per cent Chinese
MIC, PPP and such - about 10 per cent Indians
Then there are all those Sabah and Sarawak parties which were formed based on ethnic line.

I seriously think an all women party will do good for this country. At least we can break away from that racial thing. I don't think a gender-based party is all too bad.

Women tend to be less corrupt, more responsible and passionate about getting the best for this country.

Wanita Umno, for instance are the backbone of the party (too bad its current chief is Shahrizat lah....sometimes I think she looks like a man). They do the donkey but crucial works. Campaigning from door to door are mostly done by them. All those lousy menfolks, especially the Pemuda Umno are mostly only good at lepaking at the kedai mamak. Talk talk only la....jockeying for party posts la, getting contracts la, getting new wives la etc etc.....true isn't it? Ok Ok, I'm exaggerating....some of the Umno men are good people, but really la, given the chance, they too want to do that kind of nonsense too.

Eh, the Pakatan men also don't try to fool people, ok? You all are bastards too. Just look at the much suffering Wan Azizah. You really think that she don't know that's really her husband in the video ka? Come on la. Who are we trying to bluff? Just imagine the pain she has to endure for that.

Then there's Elisabeth Wong. Aiya, that boyfriend of her har....after had his pleasure, still want to take pictures some more. Really kinky bastard. Get her in trouble only. Poor girl.

Then there's all those PKR ustaz types like Badrul Amin....got two/three wives still got in trouble like that.

Oh, you all remember the sad story of this very beautiful Chinese Cambodian lady and her two children? 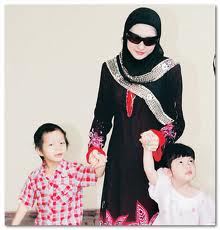 This one is the work of a super pious Kelantan Pas leader. Really shameful lah.

Indian men also got such nonsense you know. Last time got DP Vijendren. Still got like that one, just that we don't have evidence la. Really, sure got one. Men will always be men no matter what are their race or religion.

In conclusion, women should consider taking charge of things. You let men run your life, you will probably end up suffering over and over again.

Now, who should we get as our first president of an all women party for this country?