So, Dong Jong Zong are now claiming a conspiracy by the government.

They claimed at the rally today that the Education ministry have deliberately not trained enough Chinese school teachers.
Dong Zong president Yap Sin Tian said this is so that the government could send non-Chinese speaking teachers to those schools and change their Chinese identity.

This for me shows that the government is indeed inefficient. It has been more than half a century since BN has been in power, yet their conspiracy to  destroy the Chinese schools has not yet worked out.

That is why we need to change the government to the one helm by DAP. They will be more efficient. If they want to shut down the Chinese schools, they will just do it like their parent-party, the PAP of Singapore. Just bloody well shut them down. No need to have all sorts of conspiracy ma. Of course not now la, later ya when got power. Now need votes leh.

Today is the big day - the DAP-backed Dong Jong Zong's Save Chinese Education Rally is held in Kajang today.

One of their demands is to get rid of teachers who can't speak Mandarin from Chinese schools.

I'm not going to say much about it anymore. Enough lah...tired already

After this, when my non-Chinese friends talked about the Chinese schools being the breeding ground of racists, I'm not going to say anything. To me they are still wrong, but if I want to argue with them, I know they will remind me of what happened today and it will be very difficult for me to counter them.

I will still personally support the existence of Chinese schools in this country, as I still believe they are part of the multi-racial reality of Malaysia. But I will no longer try to convince others to do the same.

It's a tragedy that DJZ had choosen to allign themselves with DAP and banking on the perceived anger of the Chinese community towards the BN government to get what they want with the general election just around the corner.

I don't think blackmailing the government will do the Chinese schools any good. There will be a price to be paid for DJZ's foolishness, and that will likely be paid by those who truly appreciate the Chinese education system...and not  those DAP politicians who only care about getting the Chinese votes.

I actually wanted to end this posting with a video clip of students and teachers (including Malay teachers) of Foon Yew 4 Primary School in JB which shows them having a good time playing gasing. However, this useless, just repaired, second hand netbook I'm using simply refused the function. Too lazy to go to the cybercafe to post this on this lovely Sunday.

If you want to watch it, google "Foon Yew gasing" or find it here at.suyi99

The video was made by one of the students, sweet little Cheng Shu Yi. She set up a blog to thank me for using her video to convince readers of this blog that Chinese schools are not breeding ground of racists in my previous posting here A message from a Chinese school graduate. The video clip I attached in that posting had also went missing. Sorry.

Anyway, thanks a million back to Shu Yi.


Probably all those racial extremists cannot tahan watching the Chinese kids and their Malaiyoo teachers getting along fine together. In that video, I think the kids are really fond of that particular teacher wearing the yellow tudung. 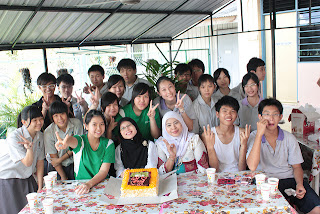 This picture of these Chinese students and their Malay teachers  is from http://zsmissthemoment.blogspot.com.