General election at a later date

Everyone keep saying that the general election is around the corner.

My last estimate was in June.

Now I'm begining to believe it will be much later.

I believe BN have finally found the right momentum for its build-up towards the election.

The coalition may want to let it rolls a bit more and only call for the election after everything were absolutely right for a BN's win.

In Johor, for instance, preparations for the election have been going relatively smoothly. Johor BN chairman Datuk Abdul Ghani Othman is keeping a time table for his visits to the peti undi areas with possible election in June as his deadline.

If the election is pushed towards the end of the year, the Johor BN machinery will have extra time to tie up all the loose end.

I think by now, BN chairman DS Najb Razak could see that it's ok to have the election a bit later as BN are really making good progress especially among the rakyat at the grassroot level.

Pakatan on the other hand are showing signs of fatigue.

* PKR's internal conflict is slowly but surely tearing the party apart. Given a bit more time they will probably implode.

* Pas has totally lose all signs of direction after abandoning its original Islamic state agenda. Now the not so hardcore party members are not even sure whether theirs is an Islamist or socialist party. No to implementing sharia, yes to a welfare state. Can change change one.

* DAP is the only Pakatan party with proper strength and direction at the moment. That is based on its not so hidden Chinese communualist agenda. But then again DAP seems to be making a lot of unforced errors of late. The latest being its ill fated joint-venture rally project with Dong Jong Zong, which backfires on them as it just revealed the party's true racialist credentials. As I had mentioned in my previous posting, some Chinese were not really comfortable by the racist demands of DAP and DJZ. They were also not so impressed by the DAP supporters, who behaved like hooligans at the rally. 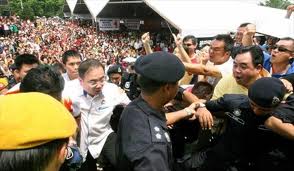 I believe, that the longer it takes for Najib to call for the general election, the more mistakes DAP will make over the coming months.

So, I think because Najib is one smart fella, he will call for the election much later this year.

My only problem with that is that I have to postpone my plan to go to Taiwan. Next year probably. Well, never mind, I'm not in a hurry.
Posted by BIGCAT at 10:13