And what a way it was for her to do so, calling on Shahrizat to resign over the cow living in the condo issue, not only as a minister but also as her boss.

It is not everyday these sorts of things happened.

For the record Shahrizat is not even resigning from her ministerial post but it was rather that her senatorial time period is expiring and not renewed.

Such was the havoc caused by Kamilia's boldness that Umno president DS Najib Razak had to tell everyone yesterday to calm down and maintain the status quo.

However, I do not think Kamilia's stand on Shahrizat was wrong either.

By right, Shahrizat should not wait until someone tells her to go. Her position has become indefensible as the NFC issue has become so messy.

I am not saying she is guilty of anything yet but she has indeed become a liability to Umno due to the perception that her position in Umno and the government was behind the awarding of the money to her husband and family to run the cow farm.

In politics, perception is everything. Shahrizat should know this and if she love the party more than herself (as they all always claim) she should not be dragging it along through the mud with her. She should just resign....for agama, bangsa and tanahair. After all,  the party is facing the most challenging general election in its history and it could do without being saddled with such baggage as the NFC mess.

Well, at least that's how I see it. Probably Kamilia shares the same idea as mine.

Najib is of course much smarter than me and Kamilia. He knows what is best for Umno, and I agree that since Shahrizat refused to do the honorable thing, then everyone should stick together and weather the coming storm. Everyone can always settled the issue after the general election. Well, guess Umno simply has to absorb the blows and make the best out of things.

Back to Kamilia, honestly, I don't know who exactly is she. But I think she is quite a tough nut to be so bold that she dare to tell off Shahrizat like that. 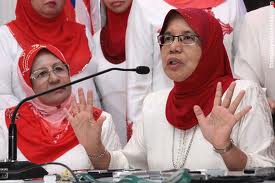 So I googled her and found her website at http://www.kamiliaibrahim.com. She may not be a "stunning beauty" like Shahrizat, but I'm quite impressed by her credentials.

Well, at least I know that she is not just some useless air head diva simply going after her boss' position lah. After all, despite being rather quiet, she managed to win her Wanita Umno number 2 post what. Must be quite something isn't she? Oh, I also like her name...sounds tough but sweet leh.

These are bits about her which I took from that website  -

- Datuk Kamilia Ibrahim is the Wanita Umno deputy chief.
- She is the Kuala Kangsar Wanita Umno division chief
- She runs a law firm, Kamilia Ibrahim & Co which was established in 1984. Previously Kamilia was a law lecturer at the Property Management Faculty of Universiti Teknologi Malaysia. She completed her Masters in Property Law and Law of Restitution and Comparitive Constitutional Law.
- She also runs a Certified Company Secretarial & Management Firm.
-  She holds the post of non-Independent  Non-Executive Director of KUB Malaysia
- She is the secretary-general of PEMADAM (Anti-drug Abuse Association Malaysia.)

There are a few other things which Kamilia does. You can find out more about her at the website.

My bet is, things will get very interesting for Wanita Umno after the general election.
Posted by BIGCAT at 11:01