A bit on Shahrizat, Irda and a poor little girl

Not been posting anything for the past few days. The recently acquired old netbook really kaput already. I'm back in a cybercafe. Also on the road again. Hard to write too long. A bit a bit can la. Too noisy. The kid sitting next to me is playing a noisy shoot-em-up game.

Shahrizat is leaving the Cabinet. Her husband charged. Guess that's take a lot of sting off the Pakatan's NFC attack. Suddenly I don't think the millions worth that much anymore. Really not worth it la. Too bad Shahrizat didn't seize the earlier opportunity of becoming an all self-sacrificing Wanita Umno chief. Would have been better that way. This one was a bit late....Well, beter late than never.

Earlier, the PM's visit to Johor on Friday and Saturday last week was quite successful. Everything went relatively smooth.The best function was the dinner gathering at Sutera Mall in the DAP's hotbed of Skudai which was attended by thousands of Chinese.

As for the PM's other functions on that visit, I think the Iskandar Malaysia showcase could have been better. The story about it, which made it to the front page of most newspapers the next day was actually an old story, already known by most people in Johor. Nothing new really. The usual billions of investments here and billions of investments there. All been told already what. But I guess it needed to be showcased anyway to the rest of the country. Made nice headline, I guess....oh, there were also those advertorials articles....must be quite expensive. So...suka hati lah....just that I wished Irda didn't spend that much money organising the whole thing just to tell an old story. Should had came up with better ideas or spend the sum on something more meaningful. My estimates of the cost of the whole telling an old story thing was around RM1 million.

Then, there's that missing five-year-old girl in Masai, Johor whose charred remains were identified yesterday. Poor little Nadirah. May Allah place her in heaven's safe embrace.... 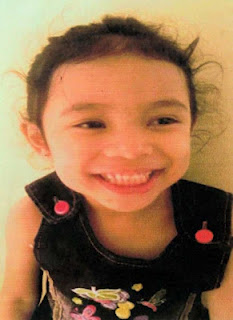 Hopefully the monster/s who committed the heinous crime pays for it here on this earth too. He/she will definitely pay in the afterlife. Parents, please take good care of your children. Keep them safe.