DAP's latest moves which seems to be veering towards the Chinese community's far right could very well be early signs that Pakatan will soon no longer be as we know them.

The three latest major moves by DAP were -
1. their insistence that they are more Chinese than MCA during the debate between Guan Eng and Soi Lek. It was Guan Eng who insisted for the debate to be in Mandarin,
2. spearheading the anti-Lynas demonstration which was the first ever of its kind in recent memory dominated by Chinese protesters and backed by Chinese-own media,
3. declaring open support to the upcoming Dong Jiao Zong's Save Chinese Education rally which bring back the memory of the infamous Operasi Lalang of the mid-1980s.

Perhaps DAP, which I always believe to be smarter than their Pas and PKR friends have seen the writing on the wall - that they are not likely going to take over Putrajaya in the coming general election.

The non-Chinese voters are coming back to BN. That's a fact which they cannot deny. My simple calculation is that, at the moment, BN is almost certain to win a simple majority in Parliament. A huge final push and no more major screw-ups will make it not impossible anymore for the coalition to get back their two third majority.

So, the next best thing DAP could do with such an outcome in sight was to get as many seats as they can by capitalising to the max their current popularity among the Chinese. 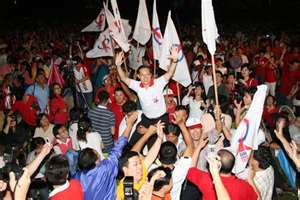 Thus their clamouring of late on how Chinese they are, including of course how they love the Chinese education system, which was actually eradicated by their parent-party PAP of Singapore from that island republic.

It's quite obvious that DAP's Malay friends in Pas and PKR are losing ground. Kelantan, for instance may still be under Pas rule after the next general election, but the hard work by Mustapha Mohamad and friends may likely reward Umno with a lot of parliamentary and State seats from there this time around.

In Johor, where I am more fimiliar with, I can say for certain that the Malay elements of Pakatan will be wiped out. Johor DAP knows this and are now currently shifting their strategy by concentrating their efforts more in areas with large number of Chinese voters.

Their insistence on contesting in as many constituencies with large number of Chinese as possible, is an indication that they know that their Pas and PKR friends could not be counted on to deliver the goods. They definitely do not want to waste areas such as Gelang Patah with 52 per cent Chinese voters by giving in to the likes of that hapless Johor PKR chief Chua Jui Meng.

Whatever it is the outcome of the next general election, I am quite sure DAP will win a strategic victory, riding on its Chinese racialist back-up plan. This DAP's victory will however be at the expense of the Chinese community's long term interests and the country's race relations.
Posted by BIGCAT at 23:47