I was in Malacca today due to some family matters. The place looks nice. I even got to see the little bit of what's left of the Portuguese fort A Farmosa for the first time. Took a picture there, but had to delete it later. I look fat la in that picture....hehehe

Really. Somehow I always bypassed Malacca on my travels that I do not get to know the State very well.

The last time I was in Malacca was when someone took me to Jonkers Walk about three years ago. It was just a little diversion from our drive south. We just walked around there before settling for a very nice dinner at a Peranakan restaurant. But I didn't get to see more of the place as we need to get back to JB that night. Anyway, it was a pleasantly memorable evening for me.

I am definitely not a fan of Ali Rustam, but I think he's doing well as far as tourism sector is concerned.

Well, when I return to JB this evening, I got a call from a friend inviting me for dinner. Told her that I'm on diet. Can't have dinner, but tea can la. Still I end up having tea....with Pelangi porridge. Can't resist la. Guess I will be breaching 45 kg soon :-(

My friend actually works for Irda. She, however, never reveals anything about the going ons at her workplace. Not even during the peak of my troubles with Irda several months ago.

But this time she did say something about her work place. I guess she can't keep it inside her any more. She was not complaining about Irda per se, but rather the attitude of some of her colleagues.

"I don't understand how can they be such hypocrites," she said.

She said these people earn up to RM25,000 per month for doing so little and yet they bitch endlessly about Barisan Nasional and the government.

My friend, who is an Umno supporter but not a party member insisted that she was not against people having the freedom of choosing which side of the political divide they want to be affiliated to, but in the case of her colleagues, she do not see any reason why they want to go against the government.

"To just support Pakatan is still ok, but campaigning and bad mouthing against the government during office hours??? That's being too much la. And these people are very well paid and given high ranking position for doing almost nothing and with so little qualifications."

I advised my friend to cool off and explained to her that at least from what I know, Irda CE Ismail Ibrahim have of late improved things in that organisation. He will probably take care of this problem soon. 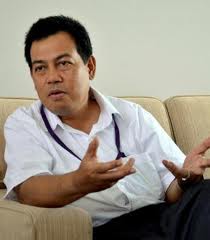 My sources in Irda had told me that it was less tense in their office now. Of course I do not expect Irda to completely change. But, as long as there is a will to change, that's should already be good enough for starters.

I told my friend to hang on till end of the year and see if those anti-government elements will get their contract renewed or otherwise. Probably Ismail is waiting for their contracts to expire as he do not want to rock the boat too hard. Hopefully it's like that lah....

I also told my friend that for those who are salaried by the government but insisted to go against it, mostly do so because they don't have enough things to do or rather prefer not to do their job properly. They have ample idle time and spending it on fanciful thoughts and meaningless chatters in the vain hope of sounding smarter than the next person.

Last time in the pantry:
"Eh, really you know, Rosmah must be jealous of Najib. That's why she get that girl blown up....bla bla bla."
After that one becoming too ridiculous :
"Tsk tsk tsk, this BN government really useless you know, price of petrol went up again, see, Anwar already said he will cut down the price.....bla bla bla."
And lately :
"Uh uh uh, see see, the government don't care about the environment. Die la people in Kuantan. Najib sure got shares in Lynas. If not, sure Rosmah got one....bla bla bla."

After these, sure got some more.

These people never pause and think how they get to be where they are.

I always of the opinion that these people simply talks just because it's fun to trash talk and sounds oh so important and knowledgeable.

Yes, it's true that there are corruption and abuse of power committed by irresponsible BN people, but are the Pakatan people any better? Well. most of the PKR people are Umno rejects anyway.

How sure are these people that people such as Mat Sabu are holy men? Or whether it's true that Guan Eng and gang really care for all Malaysians instead of just the Chinese and their votes?

Remember ya, DAP supports the extremists in Dong Jong Zong who want to chase out non-Chinese speaking teachers from Chinese schools. That one don't make DAP racists ka? Come, teachers who support Pakatan, please answer that one. Can or not?

These people, are they aware that Guan Eng and the gang (including the mild mannered Johor DAP chief Dr Boo Cheng Hau) called them Nazis who uphold an apartheid-like system in this country? Want to retrench them some more once they got power, because too many civil servants they said.

Still, want to support them? What is wrong with all these people?

People salaried by the BN government are mostly Malays. They get to where they are now because of the government's policies. Some grow up being fed by government scholarship because they are from some poor Malay families.

Went to boarding school, send overseas to further studies, get a cosy government job....and then spit on the very government which get them to where they are.....sheeeshhh....don't know lah.

p.s. Please note that as far as I know, Irda's police report against me is still on. So, you all please be careful when leaving your comments on this posting, ok? Thank you.
Posted by BIGCAT at 23:32