The Bank Negara was never known to be an institution easily manipulated by politicians in power....except of course for that brief period in the late 90s when Anwar Ibrahim was the finance minister. Well, there was that question about the RM3 billion secret piggy bank, remember?

As it was, when the whole jig was up with Anwar's arrest at that time, the whole thing collapsed. And when Dr Mahathir instituted the monetry control policies to save the country, the then Bank Negara governor resigned, citing his lack of confidence with what the handsome old man was doing.

That's when Zeti Akhtar Aziz took over and without much fuss set things in order.The whole plan of Dr Mahathir worked out brilliantly and Malaysia as we know it then stays as it was, fine and dandy.

Zeti has since developed a reputation of being a super efficient iron lady of Bank Negara. The most amazing thing was that she remains graceful, gentle, soft spoken and mostly unassuming. 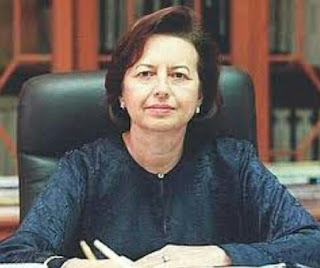 Yet, her no nonsense ways was what most of us admire her for. No body mess around with Bank Negara, these days.

And today putting aside potential political backlash, Zeti and her people moved in to arrest PKR's wonderboy strategist extraordinare Rafizi. They charged him under the Banking and Financial Institution Act for allegedly disclosing confidential banking details related to the NFC issue. Of course the Pakatan crowd may now lable Zeti as an Umno stooge for taking action against such a heroic and handsome boy. But, the law is the law, and if you break it for your political gains, then you have to pay for it. We can't afford to have people running around breaking Bafia without any action taken. That will destroy the confidence people have of our financial institutions. And for those who think Rafizi is a hero, do remember that the NFC issue was brought upon by the Auditor General Report, issued by the evil galactic empire of BN government.

Whatever it is, salute for Zeti and her Bank Negara people for acting without fear nor favour.
Posted by BIGCAT at 18:26