Lepaking with a Muslim brother and consequences

I read with trepidation the latest reports about Nasharudin Mat Isa being hounded by Pas people for being photographed with PM DS Najib Razak in Saudi Arabia the other day. 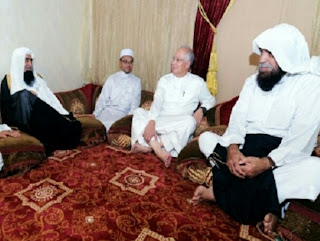 As you can see in the picture, there were Najib and Nasharudin beside him and hanging out with them were several Arab gentlemen.

The hue and cry from the Pas zealots was overwhelming. They want Nasharudin out of the party for being in league with the evil Najib. Even their spiritual leader Nik Aziz was quoted as wanting Nasharuddin out. They never even bothered to even check with Nasharuddin what he was doing with Najib.

Just because he  was seen hanging out with Najib, he was to be lynched. And Nasharuddin used to be their deputy president.

A calm and collected man, they replaced him with Mat Sabu. How la, these people...really crazy.....

Ok. When Nasharuddin arrived home at the KLIA yesterday afternooon, the Press people were waiting, expecting him to really resign. Just like what Hassan Ali did when he was chased out of the party. Well, they actually sacked Hassan, the former Selangor Pas commissioner for being too cosy with Umno people.

Anyway, Nasharuddin was not to throw in the towel. He said he was with Najib because those Arab gentlemen hanging out with them asked him to arrange their meeting with the PM. They were actually Saudi ulamas (Islamic religious scholars). When Najib agreed, they invited Nasharuddin to come along. So they all lepak together and discuss mostly about the situation in Syria and plight of the Muslim Rohingya in Myanmar which the West don't seems to care. They wanted to know what Malaysia can do to help. It all got nothing to do with Pas, Umno or any of our political bullshit at home.The Arabs probably have not yet realised that Tun Dr Mahathir had more or less retired...and Muslims in this country are now so divided after Anwar and the gang made their electoral gains in 2008.

So divided the Malaysian muslims that the mere sight of Nasharuddin with Najib warrants him to be lynched.

Nasharuddin asked - What is so wrong about fellow Muslim brothers hanging out together and tried to discuss something for the good of the ummah. Like that also cannot ka? What's wrong with these Pas people anyway?

Tok Guru Nik Aziz, you want to answer that one or not?

It's going to be raya in two days time. I hope the Muslims inthis country can stop treating each other as we are all mortal enemies. I hope we can be like Najib and Nasharuddin, lepak together and discuss things for our community's common good. Cut down the political rethorics of hate and be reasonable with each other.

Honestly, I believe that's the only way forward for the Muslims of this country. They need to set aside their differences, take the middle ground and be united. Otherwise, the future do look very bleak indeed.
Posted by BIGCAT at 06:01