I really thought I can ignore politics on this Raya eve, but it happened that I ran into an article which made me really sad. The article reflects the state of affairs of Muslims in this country. It makes them look so pathetic.

It's about DAP''s Senator A. Ramakrishnan telling Pas, the party of pejuang-pejuang Islam to sack its former deputy president and one of its most respected ulama, Nasharudin Mat Isa. 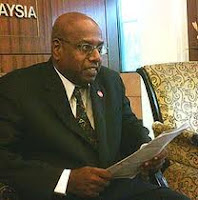 As if this Ramakrishnan has some divine power that he knows what is in the heart of Nasharuddin.
I bet he made that statement as directed or at least with the consent of the DAP leadership.

The most sad thing about it all was that a lot of Pas people lauded the call by Ramakrishnan. Just go to pro-Pas blogs and find out for yourselves. I don't want to dirty this blog by providing the links.

Well, I am not really a religious person, but in my opinion, to support someone like Ramakrishnan who runs down a fellow Muslim, especially someone who is really knowledgeable in Islam like Nasharuddin is really despiceable behavior. On Raya eve some more, when all Muslims were supposed to be together in celebrating the conclusion of the holy month of Ramadhan.

I think I really have lost all hope for these Pas people. Their hypocrisy is beyond me to comprehend.

Well, never mind, I do now hope they really sack Nasharuddin. So that he does not have to be associated with them anymore. A bunch of shallow pretencious twarts who think they are holier than others just because of their craving for power being justified by their twisted interpretations of Allah's words.