As the Bumburing and Lajim duo do their jumping tricks in Sabah, many are speculating that would be the start of the end of BN's dominance in that State.

They are expecting Pakatan to win up to 10 parliament seats in Sabah and this will greatly enhance their chances of taking over Putrajaya.

As the duo were praised for their heroic decision, all were forgotten about the way Pakatan lose Perak when a DAP assemblywoman along with two tainted PKR assemblymen turned independant causing the collapse of the DAP-sponsored and control Pakatan Perak government. The trio, especially Jelapang then DAP rep Hee Yit Foong were subjected to intense condemnation and vile descriptions of their self. Hee, who was a DAP member for more than 20 years were called names which I rather not repeat here. The DAP cybertroopers were out with all guns blazing as Pas members did funny things by rolling themselves (literally) on the streets in protest.

Now, the Pakatan camp seems to be once again confident about their chances following the duo in Sabah frogging over to their side. 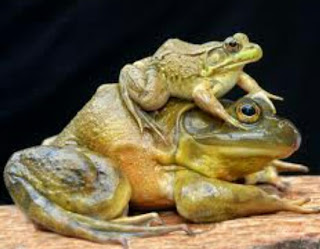 Sabah had been breached, they declared. Also on target now were BN controlled states with high percentage of Chinese population such as Johor, Sarawak and Negri Sembilan. The ultimate end game is to get as many parliamentry seats as they can to pave their way to Putrajaya. Frogging or no frogging doesn't matter if its their side are the ones doing it. Just like that Anwar's Sept 16 big bluff, remember?

Again, what they tried to hide were the troubles they were facing among their ranks, such as the DAP-Pas ding dong over hudud and how they were squabbling over basic things such as allocation of seats for the coming GE. Hee's Jelapang seat is now being sought after by DAP and Parti Sosialis Malaysia. The frogging over in Sabah has actually add to their woes as they now face a major headache to accomodate between the camp of the frogs and the camp of the original Pakatan core members in the state. All want seats for themselves and this bounds to cause a lot of unhappiness in their camp.

Instead of sunshine, the frogs actually brings bad weather, complete with rain, thunder and lightning.
Posted by BIGCAT at 00:30